How Long Must This Go On? - The Continued Abandonments and Murders of Children in Korea

I watched the MBC-TV's cultural documentary (MBC 시사교양) on child abandonments and murders in Korea in their tvpot program called 'PD 수첩' (PD Notes).  It is in Korean.  (http://tvpot.daum.net/mypot/View.do?clipid=56030283&ownerid=S45CL98BzEs0).  There are four other 3 - 4 min segments all related.

In it shows clearly the impact the special adoption law has on the number of abandonments and the killings by the unwed mothers.

Most unwed mothers leave notes with their babies when they safely abandon them at the Baby Box.  Of all the abandonments through the Box in 2013, 48.8% of unwed mothers mentioned the special adoption law as the main cause for making them to bring their babies to the Baby Box.  This just from those that bothered to mention the reasons in their notes, but the reality would be closer to 100%.  They wanted to relinquish their babies at the adoption agencies, but the law forbids the agencies to accept them unless the unwed mothers register their babies. In other words, the law forbids them to relinquish their unwanted children anonymously, so they have abandoned their babies in massive numbers.

Here is the statistics shown by MBC. 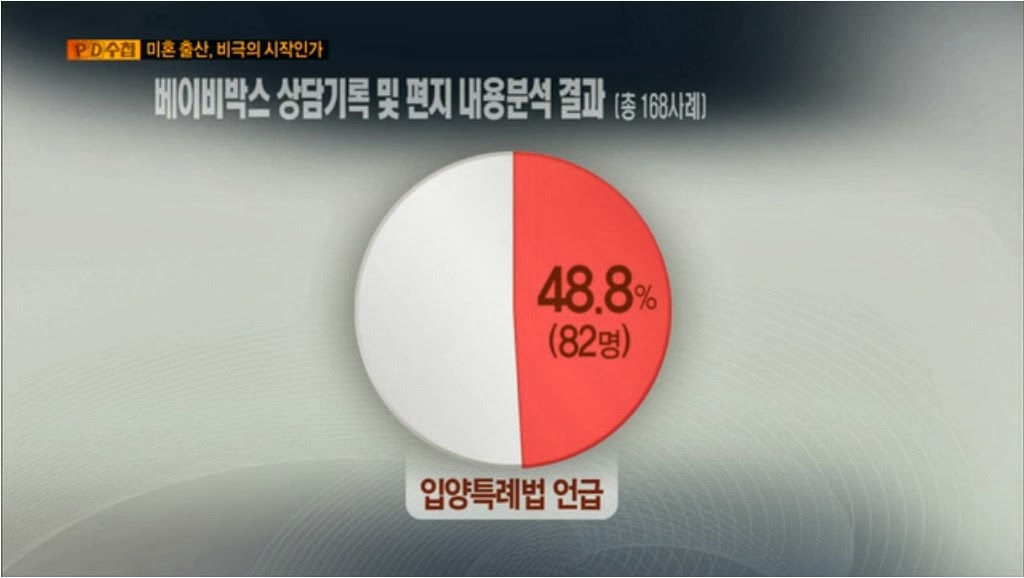 48.8% of unwed mothers have left notes with their babies at the Baby Box blamimg the special adoption law as the main reason for abandoning their children. (Source: MBC Daum TVpot)
Below figure shows the statistics on child abandonment and killings throughout S. Korea in 2013 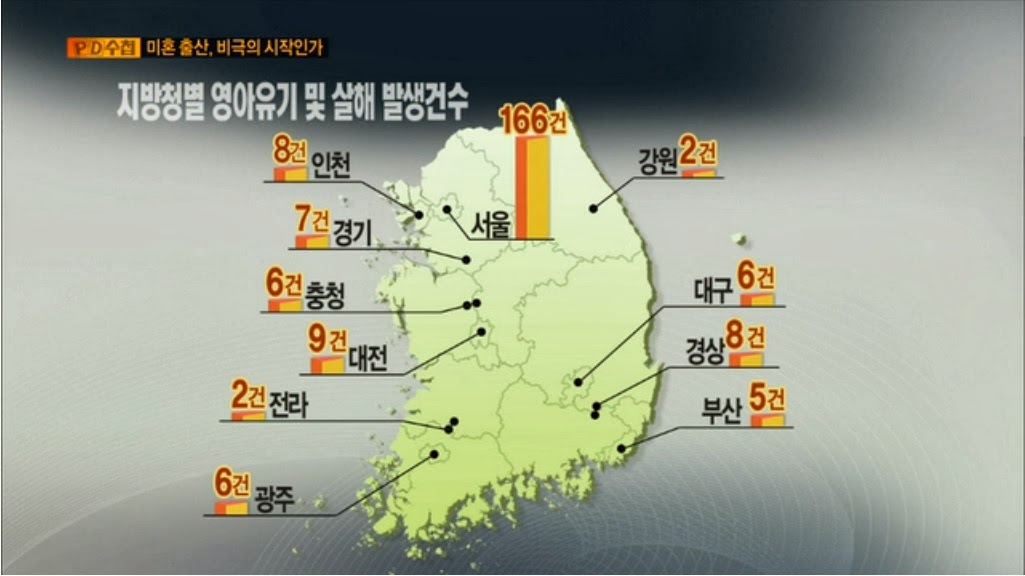 This was the data according to the police report, the number of children found abandoned  in different regions of Korea.  Seoul was reported with 166 children, which seems low based on another data I have.  (Source: MBC Daum TVpot)

This one shows the historical perspective on the rise of child abandonment in Korea. 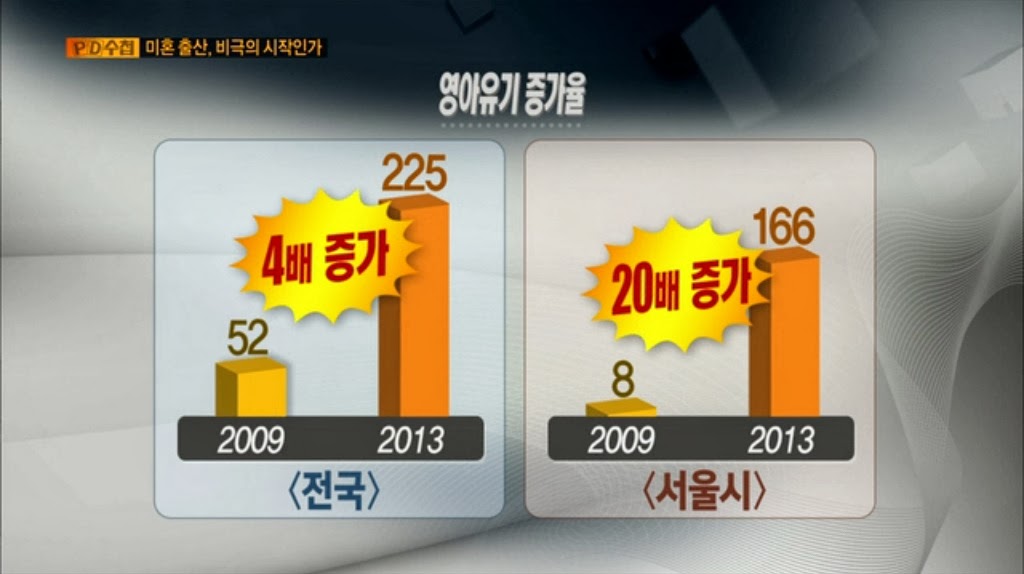 (Note: Apparently this figure doesn't seem to show the full number of abandonments in 2013, perhaps data good up to July 2013). The figure on the left is the comparison of the child abandonments between the year 2009 and 2013 at the national level, and it shows four-fold increase. The figure on the right shows the same comparison, but focused just in Seoul, and it shows 20 times the number of abandonments - 8 children in 2009 to 166 children in 2013. (Source: MBC Daum TVpot)

Here is another look at the historical perspective of child abandonments in Korea for the last four years. 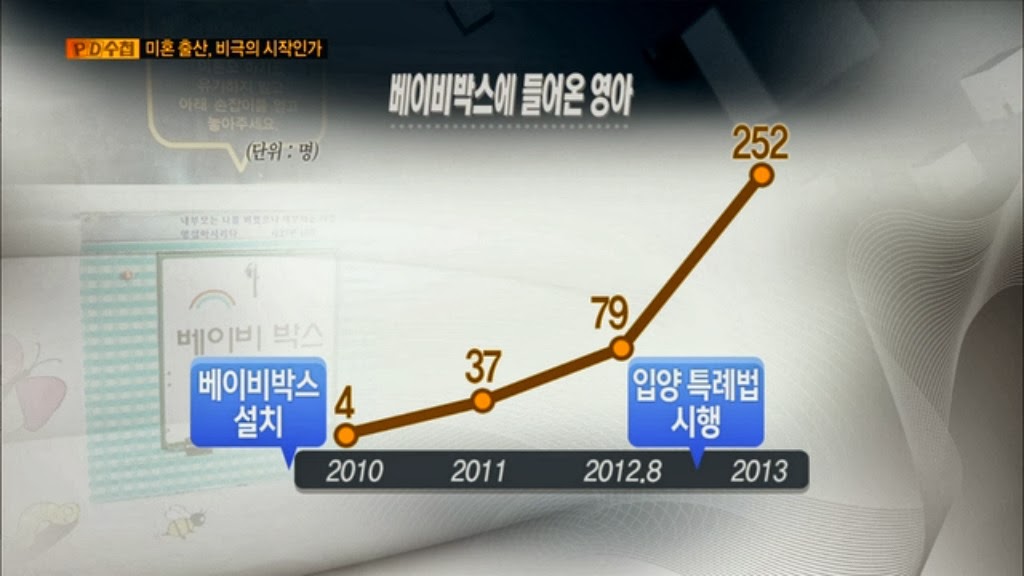 This graph shows the number of children that came into the Baby Box in the year 2013 as 252 children (58 of them returned to unwed mothers).  The Baby Box was established late 2009, then 4 abandonments in 2010, 37 in 2011, 79 by Aug 2012, at which the special adoption law was enacted, thus resulting in a sharp increase in the number of abandonment.  (Source: MBC Daum TVpot)

Not all the children are wound up safely at the Baby Box.  There are many cases of children being killed throughout Korea. Here is another screen image from the MBC PD Notes program. 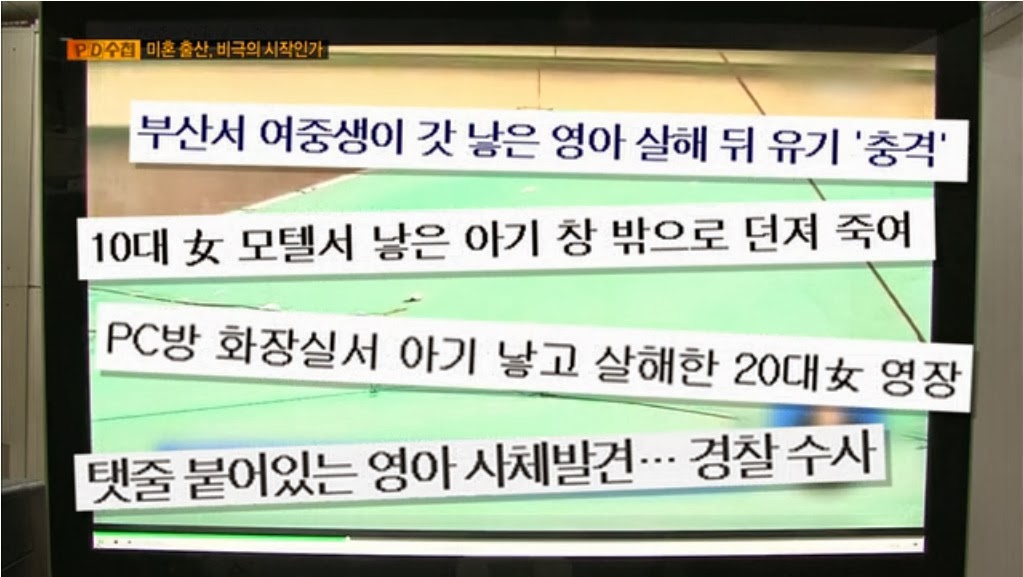 From the top reads the new flash: (Source: MBC Daum TVpot)
"A tragic news from Busan, where a Jr. High student killed her newborn and fled."
"A teen mother gives birth at a motel and kills the baby by throwing out of the window."
"An unwed mother in her 20's gives birth to a baby and kills her at a PC-bang restroom is arrested."
"Police report - A dead baby found with umblilical cords attached."

Perhaps the saddest story covered by the MBC Daum TVpot is a story of a baby discovered in a toilet bowl.  The baby in the bowl was covered by the tissue papers when found.  Thankfully a person noticed a sound and went up to check on the restroom, and found the baby alive, and reported it to the police.  The baby suffered from hypothermia, but was recoverd and doing fine. 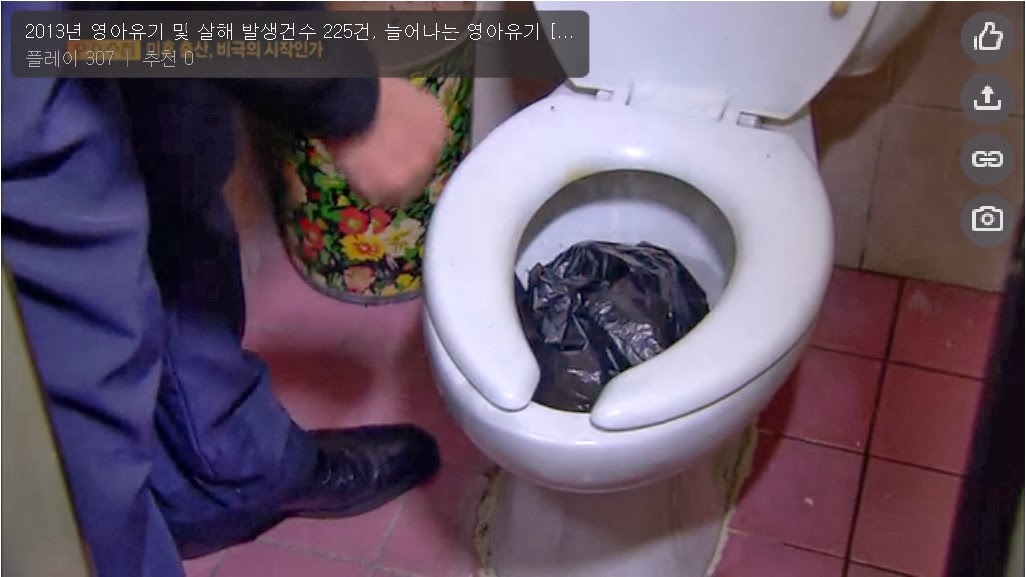 In this image, the gentleman who found the baby is demonstrating to the police on where he found the baby. The police examined the cc-camera, but could not identify the mother.  (Source: MBC Daum TVpot)

Many say the Baby Box encourages child abandonment because of media coverage.  However, the true story is that it was already well known even before the special adoption law was passed.  But the place became even greater news when the news of sudden rise in the number of children at the Baby Box was reported right after the adoption law was enacted on August 5, 2012.

The Baby Box became much more widely known after that, but only because of the sheer number of abandonment was happening at the facility right after the law.  The timing of the increase in the number of abandonment coincides exactly with the time the law was enacted.  You see, before the law, the unwed mothers had the choice of visiting the adoption agencies to relinquish their babies without having to register their babies under their name, thus enabling anonymous relinquishment at the agencies, so they didn't need to go to the Baby Box.  But the new adoption law changed all this.  The agencies, under the new law, had to turn away the visiting unwed mothers as the unwed mothers chose not to register their babies.  They had nowhere to go but to the Baby Box.
How many more babies must be abandoned or killed before the Korean Government come to their senses the follies of their law? How many children must be sacrificed to their rights to families of their own?  How long will it take to bring about the changes needed for unwed mothers to raise their children?  And what about the rights of unwed mothers that wish to remain anonymous?
Posted by Steve Morrison at 11:27 AM