A Visit to Baby Box

During my past visit to Korea, I had a chance to visit with the Pastor Lee, Jong Nak of the Jusarang Church that operates the "Baby Box", where a birthmother may secretly drop off her unwanted baby without being questioned, or be seen.  The unwanted babies are usually dropped off at night.

I have heard of the Baby Box concept being practiced in other countries many years ago, but the one operated by the Pastor Lee is the first of its kind in Korea, and it has drawn many criticism, but much greater number of praises and supports have been given to the Baby Box as many know that this has saved the lives of many babies.

After he came back from Korea, Brian sat me down to film my interviews with him where I provided the rationale why such concept like the Baby Box is a necessity, especially in light of the passage of the new adoption law in Korea. I understand that by now the documentary is finished, and Brian was planning to take the film to the Sundance Film Festival.  Best wishes to Brian and his friends on this meaningful project.

Mrs. Han, the MPAK-Korea president took me to the facility, and the first thing I noticed was that the Jusarang Church that houses the Baby Box was not easy to find.  So I wondered how the birth mothers would know where to find the facility despite much publicity in recent days.  The Jusarang Church was located in a heavily populated residential area on a downhill slope of a hill, and the church looked more like a typical house than a church building. 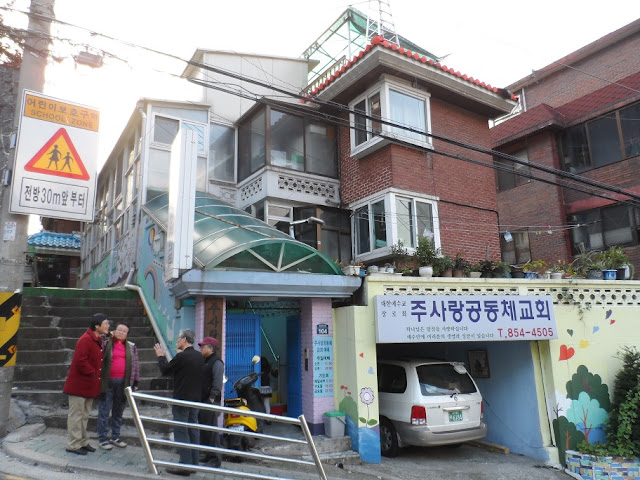 The banner reads The Jusarang Church.  The Baby Box is located up the ten steps on the left, mounted on the wall, just below the windows. 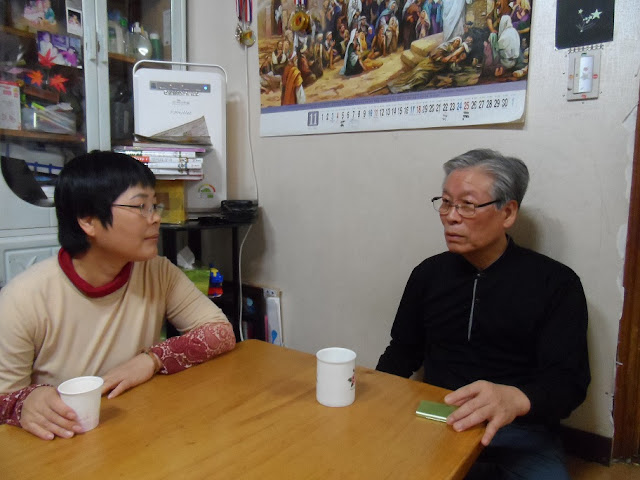 Mrs. Han of the MPAK-Korea President listens to the story of the Baby Box from its founder, the Pastor Lee, Jong Nak of the Jusarang Church 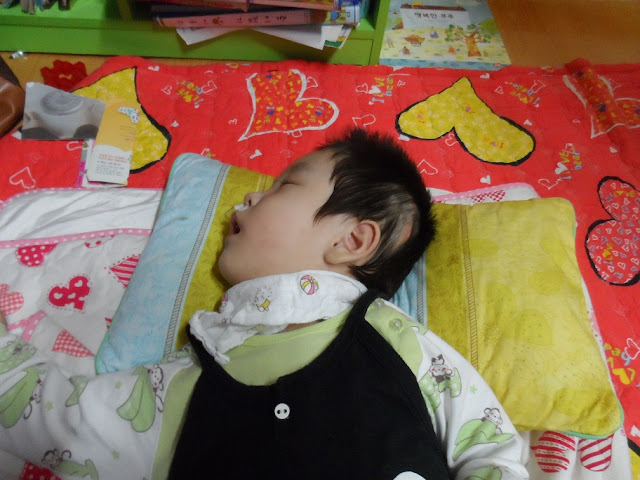 A child who is a special need sleeps in a room.  This girl came to the facility through the Baby Box. 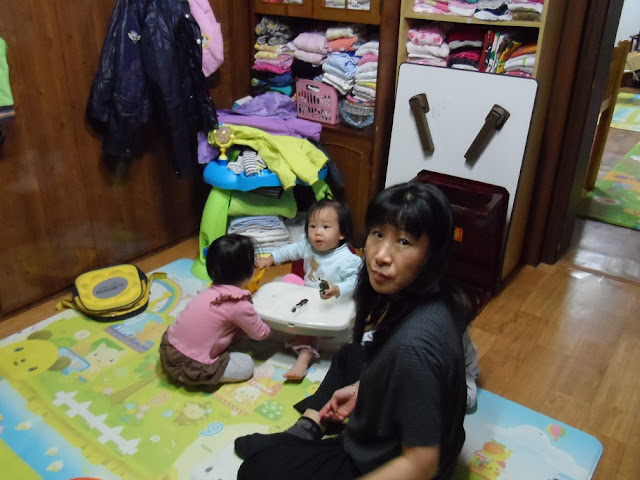 A housemother looks after the young ones living at the Jusarang Church. The place is a home to 19 children, where most of them are special needs. 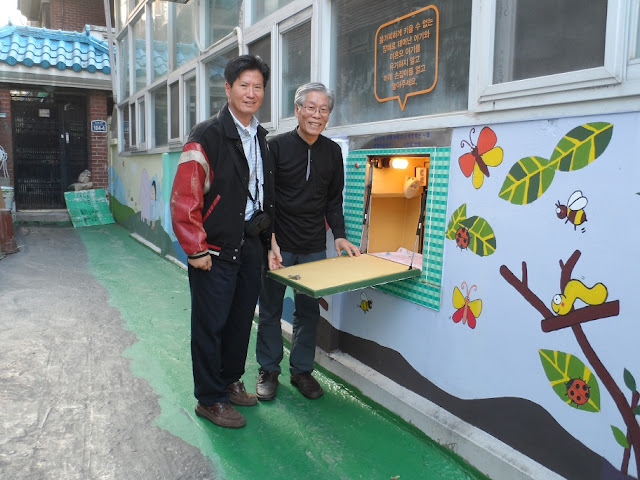 The Pastor Lee demonstrates to me how the Baby Box works.  A birthmother may open this door, and leave a baby inside the box.  Once the door closes, the bell rings inside the church to indicate that a baby has been left inside the box, thus the term Baby Box. 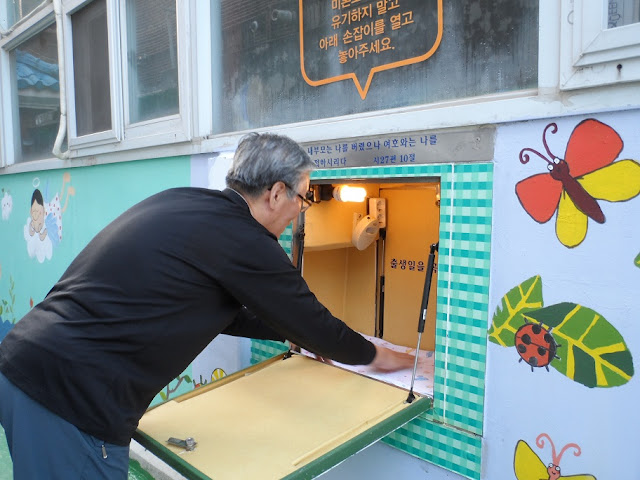 The Pastor Lee, Jong Nak smoothes out the blanket inside the Baby Box. 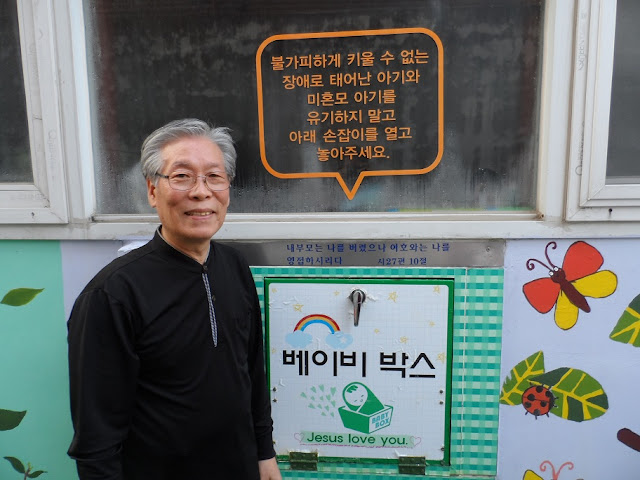 The Pastor Lee stands next to the closed Baby Box.  The orange colored words read, "For a birthmother that could not raise her special needs baby or unwedded birth, please pull the handle below and leave your baby inside."  The blue words just above the handle reads, "Though my father and mother forsake me, the Lord will receive me." Psalm 27:10 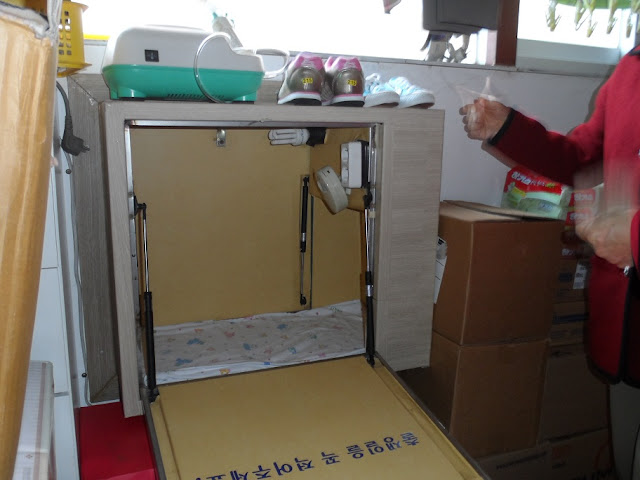 This is the Baby Box door opened from inside.  The Blue writing inside the door states, "Please write down the date of birth." In the early dawn of the day when we visited, we were told that another baby came through this door.
On one occasion at night, the Baby Box bell rang, and the pastor went outside to see if he could find anyone.  In the dark corner stood a young woman as she was sobbing.  The pastor approached her and invited her into the facility.  There the pastor counseled the woman and praised her for seeing the baby to the full birth rather than aborting the baby.  The pastor then told her to come back if she ever wanted the baby back.  But he never heard from her again.
But then there was a young couple that gave up their baby through the Baby Box and came back later and took back the baby.
When asked how the Baby Box got started, he shared a story that one frosty morning a baby was left on his door step with a thin blanket wrapped.  The pastor tried his best to revive the baby back, but it was too late.
He also heard of a couple that did not know what to do with their unwanted baby, and went up the hill and strangulated the baby and buried in the hill.
The pastor looked for a way that birthmothers might abandon their babies safely.  The Baby Box was born out of neccessity to save lives.
The pastor had a special heart for the children in his care.  He took me into a room where his biological son lay.  He was over 20 years old, and he was severerly deformed in his face and his legs were split wide open side ways.  Even though they were covered by a blanket, you could tell that he was an extreme case.  The pastor confessed, "It is because of my son that I have a heart to do what I do."
I looked at the boy and wondered how difficult it must have been for him to suffer like this since his birth.  I felt a deep sense of pity and pain as I looked at him.  There was no word that I could utter.  There was no comforting words that could come out of me.  I laid my hand upon the boy's head and looked at him, and I bowed down my head and gave a short prayer.  The pastor prayed with me.
Before getting up to leave the place I thought about taking a picture of the boy, but decided not to out of respect. As weak as he was, and as feeble as he lay deformed, there was the power of the One that binds all of us together - the boy, the pastor, and the visitors.
﻿
Posted by Steve Morrison at 12:46 AM 10 comments:

I just came back from Korea after ten days visit.  The main purpose of the visit was to participate in the MPAK Board of Directors meeting, attend the general assembly meeting for MPAK, and the 12th MPAK National Conference to Promote Domestic Adoption in Korea.  I will feature this on another blog with pictures.
But for now, the most important thing for the readers is the current happenings with the EP situation with the remaining 10% of the children that need to be cleared to meet this year’s quota.
According to the two independent sources that I talked with, the situation is not good as there is a possibility that these children may not be cleared to leave by the end of the year.  There is a remote chance that a few children may be cleared for EP and given approval by the Family Court, but they are not hopeful that all the 10% remaining children will be able to leave by the end of the year.  Even if all of them were given EP clearances, it will still take at least a couple of months for the Family Court to approve them.  I am so sorry to relay this information to all the waiting families, and I hope I am wrong.
So far, since August 5th when the new adoption law was passed, there have not been new EPs issued by the Ministry of Health and Welfare (MOHW) for intercountry adoption yet.  There have been some EPs that were cleared after August 5th, but these were for those cases that were submitted under the old law.  In addition, there have been some travel clearances given to some families – even well into November, but their EPs were cleared under the old law.  While in Korea, I met the Dolan family that came out to pick their son up to go home, and they were cleared under the old law.
As for the domestic adoption, just a handful has been approved by the Family Court under the new law.  I heard that the Family Court in Daegu has processed the domestic cases a lot quicker than the lawyers in Seoul.  So I am thinking that, depending who is handling the paper works, the process could be faster or slower.
There are primarily two reasons why the delays are happening.  First, the Family Court, where all the final adoption approval is handled, are being run by the lawyers that are not familiar with adoption.  They are examining lots of paper works in great detail.  They have sometimes contacted birthmothers to verify whether they have truly relinquished their children or not, thus adding to the delay.  In reality, the lawyers do not need to do this as the agencies have already cleared the relinquishment issues with birthmothers.  So I asked whether the court is planning to contact every single one of the birthmothers, and was told that not all of them will be contacted, but make the determination to contact them based on the information given to them.
The second reason for the delays is with the Ministry of Health and Welfare (MOHW), where they have not cleared new EPs for intercountry adoption since August.  The sources have indicated that because MOHW needs to submit the cases to the Family Court for the final approval, they are making a great effort to complete the documentation before submitting to the court for approval.  There is a talk that MOHW will hire some people well versed in English to understand certain aspects of the documents.  Also there has been some push back by the Family Court to MOHW with some incomplete documentation related to some domestic cases, and the MOHW considers this an embarrassment and is trying to be thorough before submitting the paper works to the Family Court.
So the waiting game continues…and so sorry that I couldn’t bring you better news.  But the sources I have talked with said that once they (both the MOHW and the Court) figure out all the uncertainties associated with the application of the new law, they will establish a rhythm of process, which will speed up the approval process.  I hope this will come soon, for the sake of all the waiting children and their families.
Posted by Steve Morrison at 7:48 PM 62 comments: