This report was translated from the article that was published in the January 7, 2016 issue of The Chosun Daily, a New York Times equivalent newspaper in Korea.  A reporter went undercover to reveal the reality of the illegal adoption market in Korea.
As I have stated several times before, the special adoption law took away the rights of those adoptive parents in Korea that still wish to keep their adoptions secret.  This was one of the biggest reasons for such a significant decline in the number of domestic adoption.  What used to be over 1400 domestic adoptions per year dropped down to less than 700 domestic adoptions.  And I also did mention that illegal internet adoption is quiet sizable and would probably make up the difference not seen in the recent years after the passage of the special adoption laws in Aug 2012.  This article by the Chosun Daily seems to validate my earlier claims on the real reasons why the domestic adoption was halved by the special adoption law. Many parents in Korea still wish to keep their adoptions secret, and the current law does not allow it, thus making many to choose illegal adoptions. 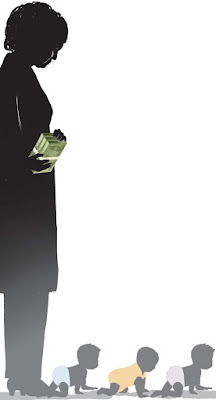 Reporters note:
“When a message “I want to adopt” was sent, the cost of introduction was $1000, an unwed mother signed a statement of “no contact”, the adopting mom acted as a birthmother in an OB/GYN clinic…and registered the baby under her name.”


This illegal adoption happens several tens of times a day…
The parents that want to adopt secretly, and the unwed mothers that want to erase their pasts


Ever since the news of a woman in her early 20s took in six children by paying money and even registering the babies under her family registry, the truth is now coming out on the existence of illegal adoption market.
On January 6th The Chosun Ilbo (Newspaper) discovered a posting on a portal site by a high school girl with a message ‘I am 8 months pregnant and is there a way to adopt away my child without my parents finding out?’.  There was a response message that said, ‘I will help you. You may call me’ and left a phone number to call.

An undercover reporter responded to the posted phone number with a message ‘I want to adopt a child without going through an agency. Is this possible?’
Within a few minutes there was a phone call from a woman in her 50s. She said,
“I work in the new born baby section of an OB/GYN clinic as a nurse, and I want to introduce you to an unwed mother who may abandon her baby and I feel bad for this child.”


The reporter told her that ‘I would prefer a girl’, and the woman called the reporter back in an hour saying, “I want to introduce you to an unwed mother who lives in Seoul Kangsuh District.”  She asked the reporter to set the date and place where the baby can be transferred.
When asked how much she charges for the introduction, the woman broker said, “I usually charge around $1000.  Because the unwed mothers want to erase any memory of giving birth, you do not need to pay the unwed mother.”


The current special adoption law requires the adopting parents to adopt through an agency, and receive the adoption approval ruling from the family court.  To do this it is necessary to have a birth registration by the birth parents.  But the method the broker uses does not involve the court system.
When an unwed mother is pregnant, the adopting mother registers her own name as the birthmother at an OB/GYN clinic.  When a baby is born, the baby is registered under the woman who is adopting. This is so that when the new mother reports the baby at a local government office, she needs the birth registry as a proof.  Since the adopting mother was acting like a birthmother before the baby was born, there was no need for her to follow the legal method of adoption process.

The broker stated, “This is how I introduced two or three other unwed mothers’ babies before.  You never need to worry about anything as I make an unwed mother sign the paper that says, ‘I will never see the baby nor the person adopting the child’. So all the backdrop work is done by me so you don’t need to worry.”
This type of adoption is practiced by the adoptive parents that do not want their children to learn of their adoptions later in life. But if one follows the legal form of adoption, his social ID card documentation will have a record of ‘adoption’, which might reveal to the child that he/she was adopted.


Not only the transfer of a child between the two persons is involved, but they can adopt by choosing a gender or the blood type, and this is another reason for many choosing illegal adoption.  And the unwed mothers that do not wish to be identified and remain anonymous on their birth giving, the advantages of the illegal adoption market are very attractive.
The experts all agree that this type of adoption is being carried out rampantly.  In the internet portal site, they call this type of adoption as ‘personal adoption’, and each day there are multiple tens of postings by people that want to practice the ‘personal adoption’.

The broker I spoke with said, “If you let me know the gender and the blood type preference I can find a baby for you.”  At first the broker said to the reporter “I may have an unwed mother who is 30 weeks into her pregnancy living in Daegu”, but when the reporter said that she wanted a girl, the broker then introduced an unwed mother that had the similar months of pregnancy that lived Seoul Kangsuh District.


In 2014 there were 637 children adopted legally in domestic Korea.  A person in an adoption agency stated that she saw some adoptive parents that came to them because they couldn’t find ways to illegally adopt children.
Posted by Steve Morrison at 10:38 PM No comments: