Korea’s Revised Adoption Process - On the Road to Socialism

NOTE of Clarification:  I am sorry for the confusion that this blog may have caused all the adoptive families in the adoption process.  This blog was not meant to scare any of those that are already in the process.  The adoptions that are currently in process will continue to be handled by the agencies.  Only the new adoptions that are taking place starting from July 1 will be affected. The only process that will be changed is the process block highlighted in 'red' in the figure below.  All the other processes are still being debated and no law has been passed on them yet.  Therefore the remaining processes are still being determined.  The process described here is what the Ministry of Health and Welfare is pushing for.  The agencies are not being closed.  They will continue to operate as the government will need to work with them. So there is no worry for those that are already in the process as your cases will not be disrupted by the changes.
- Steve Morrison
----
MOHW (Ministry of Health and Welfare) has recently announced their plan on the Revised Adoption Process, which clearly shows the path towards the government controlled Socialistic system.  The first portion of the change (the red block in the figure below), is to be enacted on July 1, 2021.

MOHW’s announcement basically states that majority of adoption duties performed by the agencies in the past will be taken over by MOHW and NCRC and the local government entities.

MOHW made the announcement only a month before its enactment. There was no discussions nor prior announcement on what they were planning to do. Even the members of KAFA (Korea Adoption Family Alliance) were caught in a surprise, and this happened behind their backs as they have been fighting against this for nearly three years.
The key Adoption Process Change Summary Proposed by MOHW and NCRC is supposedly to strengthen the responsibilities by the central and local government regarding decisions on adoptable children, protection, matching, and post adoption services. 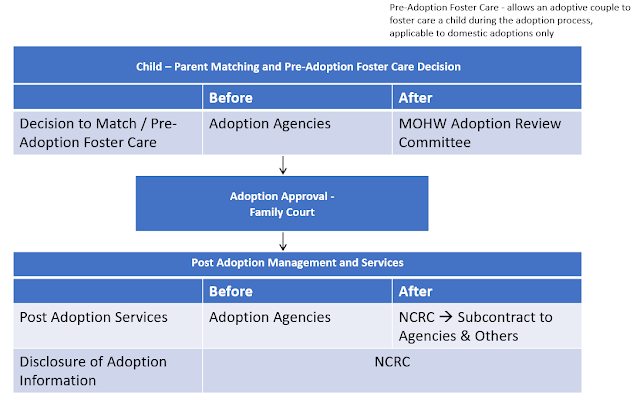 What seems to have caused such a dramatic changes in the adoption process?
There is a great amount of mistrust on the adoption agencies by the government and the public. The agencies had years of unfavorable media coverages due to a few adoptive children that died at the hands of adoptive parents, where the agencies were blamed for continued intercountry adoptions, and the agencies usually did not defend nor respond promptly to the critics. Strong campaign to get rid of adoption agencies by the anti-adoption organization groups is one of the main causes of this movement. But perhaps the greatest reason is due to the general political environment in Korea that has rapidly moved towards the Socialism by the Moon government.
Current media coverages of the adopted baby Jeong-in’s abuse and death by an adoptive parent certainly did not help, nor another abuse case brought two months later seem to have cemented the death of the agencies.
Adoptive family members of KAFA is putting up some fights to overturn the changes, but not sure how successful they will be. On the other processes, KAFA will continue to fight, especially in the areas of matching children with families, and on the post-adoption services.

The bad news of the government taking over the adoption duties from the agencies presents the following dangers:
Bottom Line – Fewer children will be placed in homes. The law will put more children at risk.

Latest as of this posting on 6/17/21.
Rep. Kim Miae (김미애 의원) met with the MOHW minister Kwon Deok Cheol and asked some tough questions such as, "Have you even thought of the countless number of babies that will be impacted by your decision?" "If I was an unwed mother with an unplanned pregnancy, would I be able to get an appropriate counseling at a local government starting July 1st?"
This exchange is in Korean only. 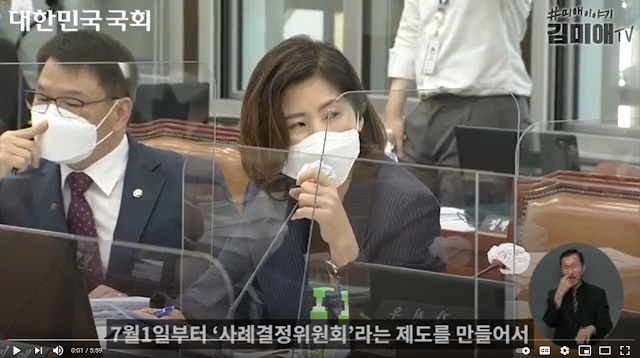 The minister had very little to say, but only to say he will take all the questions and points made and review/examine further. This has got to be a very embarrassing moment for MOHW to drastically try to centralize all the adoption processes that the agencies have built for over 60 years and take them away. I admit that the agencies are not perfect. They make mistakes every now and then. However, there is no question the government's attempt to implement the socialized structure will only hurt the children. I wouldn't be surprised to hear the increased number of abandonments and more children being given up at the Baby Box.
But I wish to applaud Rep. Kim Miae for speaking out on behalf of the voiceless children.

The Solution is to let the adoption agencies do their jobs.  They are the experts in what they do with very little turn over – thus maintaining expertise. They are the people with compassion and mission to provide for homeless children. Change what’s lacking rather than a complete replacement with an unproven methods with no expertise.
Regarding the Baby Jeong-in
What happened to the baby Jeong-in should never have happened.  Recent tragedies with Jeong-in should be viewed as child abuse rather than as an issue with adoption.
According to the MOHW Child Abuse and Neglect data from 2019 (see graphic below), of the 30,045 cases of child abuses reported in 2019, the Nonadoptive families’ abuses and deaths of children far outnumber those by adoptive families.
Of all the abuses reported, 75.3% abuses is by biological families, Schools/Institutions abuse 16.6%, Relative abuse is 4.4%, Non-Family abuse is 2.2%, Others at 1.2%, and 0.3% by adoptive families. 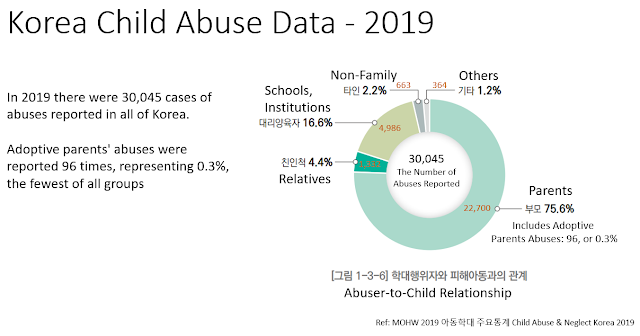 Note: Data for 2020 or 2021 is not available. But it is believed that the reports of abuses increased significantly during the Covid-19 pandemic period. But the abuse by the adoptive families is still expected to be around 0.3%.

Posted by Steve Morrison at 6:07 PM No comments:

I heard of this movie, "Forget Me Not - A Letter to My Mother" a month ago while I was in Korea. Here is an article on her interview.

When Sun Hee Engelstoft, a Korean-Danish filmmaker, decided to make a documentary in Korea, she had planned for it to be a happy tale about a young woman's journey to becoming a mother.  She had strong convictions that unwed mothers in Korea wanted to keep their children, but always ended up working out differently.
While this may be true for some unwed mothers, significant majority of unwed mothers really do not.  This is evidenced by so many babies being abandoned or given up for adoption even after multiple counseling and advices at the Baby Box and at the agencies. Even after two years after the initial adoption process, and being notified multiple times to take their babies back by the agencies, the Ministry of Health and Welfare, and the children's court, hundreds of unwed mothers do not want to take their children back.  Only a handful of them change their minds during the long process.
So her statement, "I’ve never met a woman who actually wanted to give away her child..." is her own statement, but in reality most unwed mothers do not want to keep their children.
In truth, most women want to hide their child birth history as this will be a liability to them when they want to get married, or continue with their education or keep their job.  Of course the unacceptance by her family is definitely a reason.  Another reality is that there are many teen unwed mothers that are simply not  ready to be mothers or don't want to.  For most unwed mothers, they simply want to get out of the burdens.
What's interesting is that Ms. Engelstoft's birth mother didn't want to meet with her because the birth mother wanted to remain anonymous.  I feel so bad for Ms. Engelstoft for having been rejected, but this is not unusual.  Of all the contacts made with birth parents by adoptees searching for them, around 30% of the birth parents do not wish to meet their birth children.  The birth parents, in most cases have married with children and moved on.  They do not want their past history to come back and risk their existing families and relationships.
Perhaps the biggest drawback with this movie is that she is just one-sided in terms of her view of adoption.  Ms. Engelstoft should have met and spoke with many other women that have given up their babies, and this would have helped her to look at a broader perspective in terms of the complexities involved in unwed mothers that give up their babies. Her problem is that she wants to portray all unwed mothers as women that want to keep their babies, but in reality this is far from the truth.
As for her, she should have considered what would have been the alternative if she had not been adopted. She most likely would have wound up in an orphanage, suffer the lack of parental love and care, and experience the loss of emotional support and the loss of stimulus for  the development of intellect and education (it is a well known fact that children that  grow up in institutions suffer delayed mental and emotional development).
She would be labeled as an orphan, ridiculed by her peers in school, and face discrimination from the society, and would be forced out of the system at age 18 and live the rest of her lives with so much struggle and loss.
Her other statement, "“instead of building on the infrastructure, supporting their population and taking care of our own children, they have been sending the problems away.” is a naïve statement, or a willful rejection of reality to fit her narrative against intercountry adoption.  The true reality of the infrastructure in Korea is that if you don't get adopted, you go into an orphanage.  Would she have preferred this instead?
It is so unfortunate that during the eight years of making this film, she has not even attempted to understand the hearts of the thousands of orphans in institutions that long for families of their own. I still remember visiting an orphanage and in my conversation with the orphans there I asked the question, who among you would like to be adopted?  Without a single exception every one of the children raised their hands.
Posted by Steve Morrison at 10:10 AM 1 comment:

Let Us Meet At SEOUL - Meet Me Via Zoom

I am honored and privileged to be a guest speaker at "Let Us Meet At SEOUL" - a program by Rev. Sung Chul Park of the Korean Adoptees Ministry (KAM). I will share my adoption story and the current development/happenings on the intercountry adoption law in Korea. This is followed by a demonstration on making "Bibimbap", a delicious Korean dish that is widely gaining world attention. 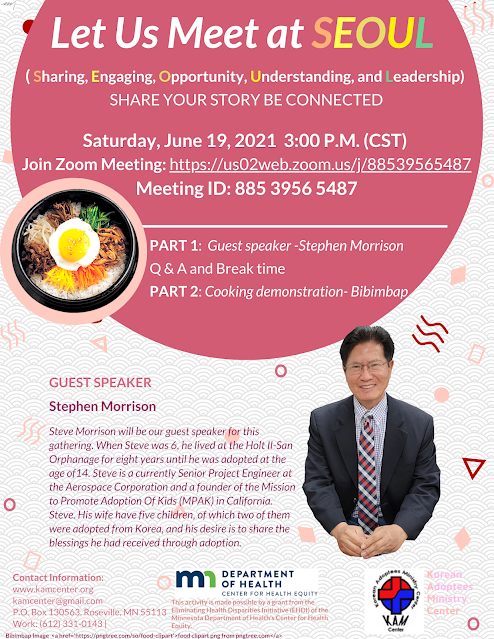 Posted by Steve Morrison at 10:20 AM No comments: