From Referral to EP to Finalization Timeline - An Adoptive Parent's Experience

Chris Marci, who just recently brought her daughter home from Korea, shares an experience on what the timeline is like from EP to the finalization of adoption at the family court. Thanks to Chris for sharing this.  Others are welcome to share their timeline experience. Here is the writing by Chris.
------------------

Like many others here, I’ve been reading and hoping to glean some information as to how long the wait will be. We just brought our little girl home so in keeping with the information on the court, I’d like to put our timeline out there.

We were matched with our daughter at 6 months of age in December 2011. We had our EP submitted in December 2012. We were one of the very last groups for 2012. In March our EP had been processed. We were given a court date of in mid June. We bought our tickets through Travelocity via Singapore air and it cost about $2800. We stayed at a business travelers hotel in Myongdong for a 5 day visit. We saw our daughter twice at Eastern during that time.

The court date was very relaxed and the judge was very personable. He asked us very easy questions. Why do you want to adopt from Korea? How will you provide care since you both work. What did you think when you learned of the delay in the adoption process? After answering all their questions through a translator, he issued provisional approval. We left the following day back home.

14 business days later we got word everything was done and we could come get our daughter. We waited about another 2 weeks to travel for work. We booked our tickets through a travel agent this time because we needed a one way child ticket who sat with us. That couldn’t be done through Travelocity. The cost was approx. $3600 for this flight. We stayed at the adoption agency this time.

The visa appointment took about 45 minutes because no one else was there. They issued an IR3 visa. We left the following day. Immigration and customs was very straightforward on both the Korean side and the US side. Basically we gave the papers they asked for, waited about 10 minutes then went on with our travels.

Our daughter, now 27 months, is home with us. She had a rough trip, but otherwise is doing just fine. Sleep is tough, but otherwise she’s doing all the normal things a precocious 2 year old should be doing and showing no signs of any problems.

Hopefully this story gives the rest of those out there some frame of reference for their own waits. I was told by the adoption agency over there that our wait will be longer than those who follow us now that the power that be have got the process established.

-------------
(Steve's note:  So far, during the 14-day waiting period, no birthmother has stepped in to take her child back. Neither domestic nor intercountry.)

Some Questions You Can Expect from the Judges

These are some of the questions you can expect to be asked during the court appearance.  It is advised that each family answer all the questions clearly and honestly. At the end of the court appearance, the judge will ask if the family has any comments for the Court.  This is when you can speak respectfully and indicate that you are completely prepared and ready to have your child be placed with your family as soon as possible.


·         What challenges do you think you might have with the child/due to a trans-racial adoption?


·         What training have you received in regards to cultural issues and post-adoptively searching for parents?


·         What time in his/her life do you think he/she will deal with these post-adoptive search questions?


·         How do the children already in your home feel about adopting a child from Korea?


·         Are you going to allow religious freedom for your adopted child?


·         What are your thoughts about raising a child of a different culture?


·         Are you going to raise the adopted child the same way you are raising your other children in the home?


·         What is your job? Could you give more a specific explanation about your job?


·         (If both of parents are working) what is your parenting plan after going back home with the child?


·         (For families with a few children) could you specify your financial plans to parent your children?


·         (If the family has a young child in care), why do you want to adopt a child even though you are already raising a child?


·         Have there been any changes since your original home study? (The answer would be that there have been no changes since the last update.)


·         What were the best part /the most interesting part in the adoption education and training?


·         With the final court approval, you will become the only parents to the child as the relationship between the child and the birth parents will be cut and you cannot reverse this court approval. Are you fully aware of this?


When the judges were recently asked to respond to the necessity for the Court appearance, they explained that even though they are fully aware that the applicants have already been assessed to be eligible as adoptive parents per the pertinent laws in their respective countries, it is very difficult for the Korean judges to determine the suitability of the adoptive parents based on documents alone.


Just recently, there was a ruling in a domestic adoption case, where a parent had an incident of a past drunken behavior that resulted in his arrest many years ago.  A judge told him to “Do your best to raise the children you already have.” And he declined to approve the adoption.


Is there an advantage of the One Trip Option versus the Two-Trip Option? It may be cheaper and easier on your time if you take a two trip option.  Because on the second trip only one person is required to go back to pick up the child. This option makes most sense if you have other children at home to consider, and limited in time to travel.


To date, it has been observed that the final adjudication is issued by the Court in a timelier manner for families who have indicated to the Court that they are staying in Korea for the duration of the process. The Court asks for a specific return date and for families who have indicated this.
The Final Adjudication has been issued in enough time for these families to leave according to plan. Families' stays have ranged from 4 - 6 weeks.
Posted by Steve Morrison at 5:38 PM 10 comments:

One Year Ago...A Look at the Results of Special Adoption Law

The Special Adoption Law was enacted in Korea August 5, 2012. It has been one year since the enactment of the law, and the fallout from has been tremendous.

While there is no data available nationwide showing the true number of baby abandonments by birthmothers, I would like to show the results from the number of babies that were abandoned through the Baby Box in Korea.  The Baby Box operated Rev. Lee Jong Nak of the Jusarang Community Church is the only one of its kind in Korea.

The birthmothers fear the birth registration requirement imposed on them by the Special Adoption Law, as they fear having the records of births of their unwanted babies in their family registries will hurt their future and their family.  Many of them are teenage moms and they simply cannot raise the babies, nor do they want to.

I participated in the 2013 International Korean Adoptee Association (IKAA) Gathering during the week of July 29th - August 4th.  There were around 500 Korean adoptees from all over the world, and I had a privilege of conducting a workshop to speak about the impact of the Special Adoption Law on both the domestic and intercountry adoption. The room assigned to my presentation overflowed with people and the responses have been great.

There were some individuals present in the room that clearly had differing views on adoption compared to MPAK, but they were very civil and cordial.

I got the data directly from the Baby Box, as it appears they keep a good record of all the babies being abandoned, and they went through each notes and gleaned out all the notes that mentioned the difficulties associated with the Special Adoption Law. 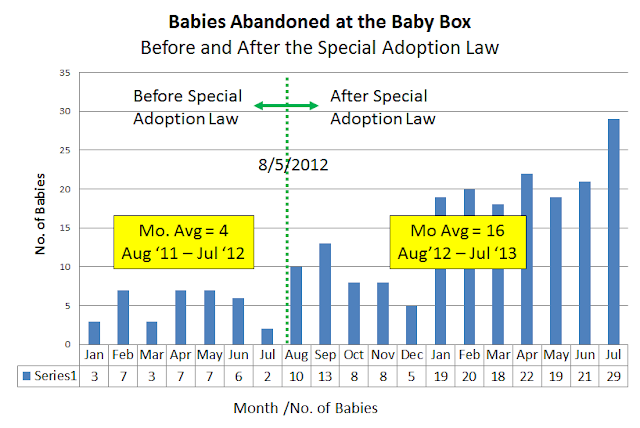 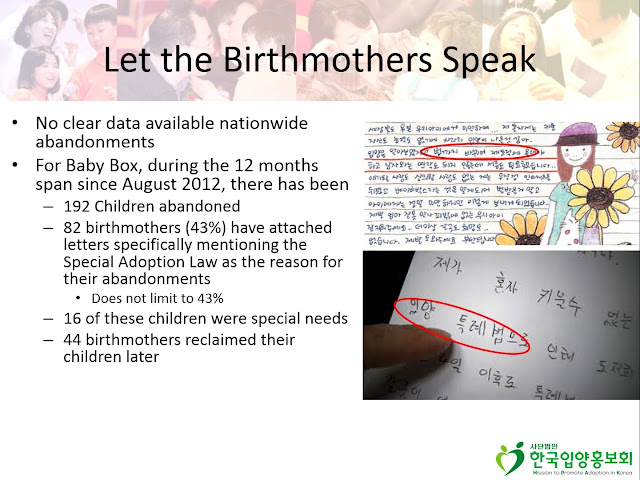 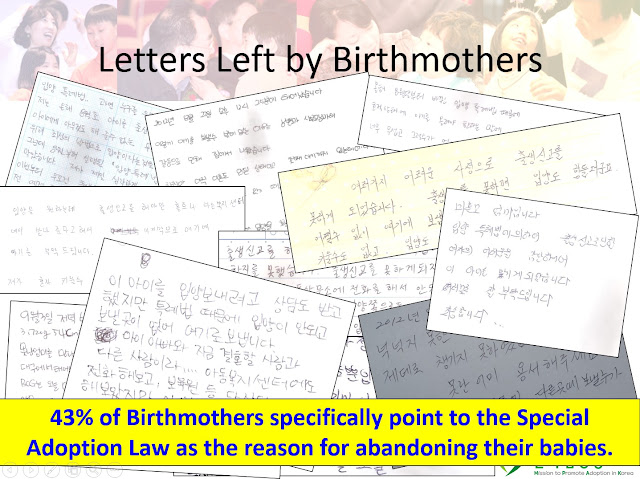 Some have tried to explain away the reason for such a great number of abandonments at the Baby Box by saying that it was due to the heavy media exposure, and  this encouraged more birthmothers to relinquish.

I countered this argument with a reasoning that having homeless shelters and exposing the availability of such facilities does not cause the increase in the number of people becoming homeless.  But rather, the exposure of such facilities come to the aids of the people that are already homeless and looking for places to be fed.

Likewise the mere exposure of the Baby Box does not cause more abandonments.  It offers as a method to birthmothers that have already abandoned their babies in their hearts.  Rather than risk the babies to be abandoned in unsafe ways, the Baby Box provides a safe way.

I must agree that it is important for children to have access to their records.  But there are different ways to do this than to force birthmothers to register their unwanted babies.  While the intent of the law may have been good to bring it up to the international standards, it has to adjust to the cultural aspects of the people involved, and not force upon them when they are not ready.  Especially, when it risks the lives of children at stake.  Having  a good record is important, but in the process of having the good records, let's not risk the lives of children.
Posted by Steve Morrison at 6:25 PM 1 comment: