The Irony of Adoption Law that Blocks Adoption

The Irony of Adoption Law that Blocks Adoption

Recently there have been many news articles in the Korean media such as TVs and the newspapers criticizing the Special Adoption Law that was passed in Korea last August 5, 2012.  In fact there have been many adoptive parents and professionals and news media that have called for the elimination of the new law or revise it to save the lives of children and to allow adoption of homeless children.  Our MPAK website in Korea (www.mpak.org in Korean Language), has been busy with the comments by many adoptive families that are calling for action to put a stop to this, and the nation is taking notice.


The irony is that the Special Adoption Law that was passed to serve the interest of adoptees and birthmothers has become a complete fiasco that has tremendously reduced the number of adoptions taking place - both domestic and intercountry.  It is the irony of the adoption law that blocks adoption.


See the figure to see the dramatic changes that this new law has brought.  This figure will show a dramatic rise in children being abandoned (abandoned not for adoption, but through Baby Box, police stations, door steps, alleys, orphanages, etc).
﻿ 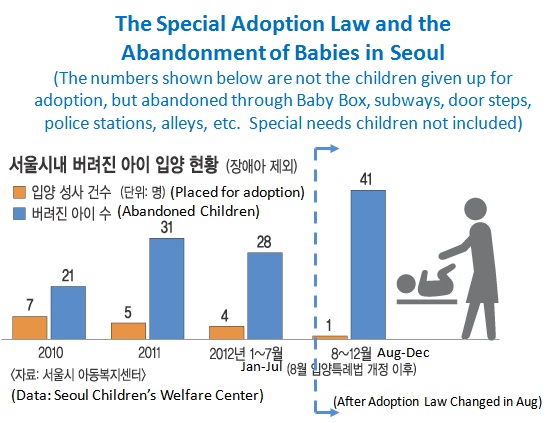 The new law, which requires all birthmothers to register their babies in their family registries, was designed to help grown adoptees to find their birth families later in life.  But there are so many children being abandoned in Baby Box, subways, door steps, trash bins, and in many cases these children are found dead.


While the law was designed to help grown adoptees to locate their birth families by forcing unwed birthmothers to register their babies in their family registry so the record will be available for returning adoptees, the law was passed without due regard to the reality of the Korean adoption culture.


Because the new law forces birthmothers to register their babies, the great majority of the unwed birthmothers are afraid that their past improprieties will go recorded and remain with their records for life.   A significant number of them are teenagers or even in their 20s.  These girls do not want their young lives to be tied down by the responsibilities and obligations they were not prepared to handle, and to face their parents or friends in such situation would bring them tremendous humiliation not only to themselves, but to their families as well.


For these girls, the requirement to register their babies from unwanted pregnancies is like a death sentence as they will be tied down for the rest of their lives.  They may have to give up schools, their prospect of getting married is significantly reduced as most men do not want girls with babies…the pressure to adhere to the new law at such young age is tremendously stressful, thus causing many girls to opt for secret abandonment.  This is the reality of the current adoption environment in Korea.


Here is a heart wrenching note left by a birthmother when she left the baby in the Baby Box. “I am sorry to do this upon my baby who hasn’t even seen the light of the world…Because I can’t raise this child nor have the ability, the adoption is a better alternative.  However, I have already looked into adoption, but due to the changes in the law I am required to register the baby, and I cannot get a hold of my boyfriend as I needed some documents…I have no one to discuss this with, so I searched for the Baby Box, and I know I will be punished for this by God, and I am so sorry to do this for my baby, but I had to give up the baby this way…Please raise my baby well as her only fault was to meet a wrong mother like me…I have no other places to go or hope..Please help. Please.”


Here is another note by a different birthmother giving up her baby. 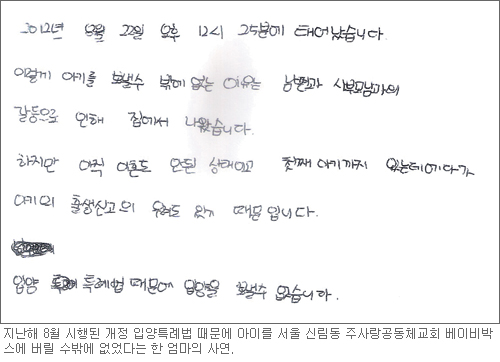 “The baby was born August 22, 2012 at 12:25.  I have no choice but to give up this baby like this as I have left my husband due to the trouble with him and the in-laws.  But we are not divorced yet, and there is the first child, and I am afraid to register this baby under my name.  And I cannot even give this baby up for adoption due to the new adoption law.”


The new adoption law requires the birthmothers to register their babies.  Without registering their babies they cannot legally give up their babies for adoption.  They have been turned away from the adoption agencies and other facilities as these organizations have been instructed not to take any children that have not been registered.


This has driven many birthmothers to choose unsafe ways of abandoning their babies, and many babies have lost their lives.  Thankfully there have been many babies that have been saved, especially by the effort of the Pastor Lee and the Baby Box.


Another aspect of the new law that goes against the adoption culture is that in the past most of the domestic adoptions in Korea were done in secret.  Adoptive parents adopted their children in secret and the children grew up not being aware of their adoptions.  Because the culture in Korea is heavily into face-saving, many parents who can’t have children adopt children secretly and pretend to others that the children were born from them.  But the new law comes around and removes this option of secrecy, and this has caused the significant reduction of domestic adoption in Korea as people can no longer adopt secretly.  As I have said before, the irony of the adoption law that blocks adoption.


After the passage of the law in August 5, 2012, the intake of children for adoption by the agencies in Korea has dropped to less than half.  The agencies are claiming that the other half is being made up of illegal black market type adoptions and abandoned children.


If a birthmother chooses to register her child, and if the child gets adopted soon, the baby’s name will be removed from the mother’s registry.  If this is the case the birthmother may avoid the record of the birth registry.  But the problem occurs if the child’s adoption is delayed or no adoption takes place.  The child’s name will stay on the birth registry.  The record will follow with her even when he is put into an orphanage.  This is the reason for the reluctance on the part of birthmothers not wanting to register their babies.


Adoption professionals in Korea emphasize that the Special Adoption Law needs to allow a way for adoptees to be able to trace their birth families and at the same time provide privacy rights for birthmothers.  Mrs. Han Youn Hee of MPAK-Korea president stated, “I question why there is a need to force birthmothers to register babies just to provide the rights to adoptees. The court can keep the adoption records secret, and only open for reviews when both the adoptees and birthmothers agree.”


I was so happy to see the responses by so many people in Korea and especially by the media against the fallacies of the new law.  This new law, so flawed and so ill conceived, is being scrutinized and the pressure is mounting to relook at the law.  Having the media on our side is very important as this is such a powerful way to convince the mass of people and sway opinions.


Unfortunately there was no criticism on all the heartaches associated with the intercountry adoption.  This is understandable as all the protests being made by the Koreans nationals are directed to domestic adoption issues.


I am praying for God’s guidance on how I can impact to help with the intercountry adoption process as I feel so powerless.   Lastly, I want to share with you a powerful Bible verse that my nephew Matthew shared.  "Through the praise of children and infants you have established a stronghold against your enemies, to silence the foe and the avenger." (Psalm 8:2 NIV).


I am praying for a quick revision in the adoption law so that children’s lives will be saved, and that children will find homes through adoption.
Posted by Steve Morrison at 9:33 AM