Adoption, EP, and Court Status in Korea as 2015 Closes

I realize that I haven't shared for a long time the current adoption happenings in Korea.  I apologize for the delay in providing the latest information.  But to be frank, not much improvements or good news have been available to share.

It appears that the total number EPs granted for the year 2015 is going to be around 320 - 330. This is the combined total for all three agencies.  This is consistent based on the projected domestic placements, which is around 440 for all three agencies.  Again the '2/3' rule still in place. I need to revisit these numbers next year and give you more accurate count.

But the Family Court process is flowing smoothly with no issue so far.  I'm told that the court process (from the time of the paper submission to the finalization) takes around 2 - 3 months nowadays.

Ever since the Special Adoption Law was placed, hundreds of babies are continuing to be abandoned, and frequent news stories of the babies being killed and discarded in Korea are still common place. There is some movement to revise the law to enable the agency heads to register for the babies being abandoned and make them available for at least the domestic adoption.

The number of children available for adoption is continuing to decline. While there are some factors to consider such as better sex education to avoid pregnancies, some unwed mothers choosing to keep their children, and many illegal internet adoptions, but I am quite positive that the greatest contributor to the reduction in the number of children is due to the sheer number of abortions taking place in Korea.  While there is no definite data on this, many unwed mothers choose to abort their babies rather than face the complexity of registering their babies and face the risk of raising them in a society that does not embrace them well.

Posted by Steve Morrison at 12:42 AM No comments:

Interview with Mr. Kim, Sunup - An Orphan Who Never Got Adopted

This is a story of my childhood friend Kim Sunup, who never got adopted and aged out of the Holt orphanage at 18.  A few years ago, I had an interview with him as I wanted the returning adoptees participating at the 2010 IKAA Gathering in Seoul to meet him and hear his side of the story of not having been adopted and aged out.

Each time I visit Korea, I try to meet with my friends Kim Sunup and Kim Chulsoo (whose story I featured in my previous blog).  The three of us were very close to one another at the orphanage we lived. I got adopted out at the age 14, but my two friends never got adopted and stayed in Korea, and struggled through their lives. While I was driven to study in a major university to become an Aerospace Engineer, half way across the ocean were my two friends, as they lived at one time as homeless in the streets.

Today Sunup owns and operates small sign making business nearby Il-San City, where he is able to make ends meet. 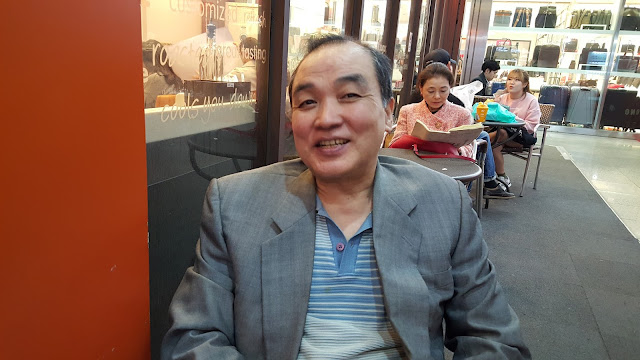 ﻿
I met up with Kim Sunup at Seoul Station in Korea two weeks ago.
Here is the interview content with my friend Kim Sunup


An Orphan Who Never Got Adopted


I am 56 years old and live in Il-San and I have a printing and stamp carving business.  I am married and live comfortably with my wife.

Q: Did you live in an orphanage as a child?

Q: At what age were you admitted to the orphanage, and how long did you live in that facility?


I was admitted to the orphanage at 7 years old.  I lived there for 11 years.

Q: How was your experience in living in the orphanage?

Q: When did you come out of the orphanage?


When I turned 18, my orphanage director who was in charge of us came to me suddenly and said that I must leave the facility.  Because I have just turned 18 the director said that I had to leave. When I heard those words I was very shocked.

Q: Did the orphanage provide any preparation for you to leave?


Absolutely none.  The director gave me $100 when he sent me out.  But that lasted only a few days.  It was very upsetting to hear that I had to leave since the orphanage had taught me no special skills and I could not be employed.

Q: So it must have been very difficult for you to survive day to day.


That’s right.  Every day I had to survive not knowing where my next meal would be coming from.  It was the most difficult time of my life.

Q: Was it typical at the time that when an orphan turns 18 he had to leave the orphanage?  Was this practice applied to just your orphanage or was it applied to all the other orphanages in Korea?


As far as I know that was typical of how the orphans were forced out.

Q: Mr. Kim, you have my deepest admiration and respect that despite all the incredible sufferings that were dealt to you and you still did not give up and have raised yourself up to where you are today.

Q: However, do the orphanages still require children to leave institutions when they turn 18?


I believe that is still the case.  But nowadays they are doing more to prepare the outgoing orphans.  I believe they give more money and teach them some skills, but that is still not enough.  So it is still very challenging for them to survive in the real world once they leave the orphanages

Q: If you had a wish in the past what would that have been?


I enjoyed studying.  I had a dream of becoming someone and have a successful life.  I had hoped that I would be adopted to America. But I wasn’t given that choice.  At the time it was almost impossible for an orphan to go to a college.

Q: As I listen to your story, I feel so sorry that you weren’t given that opportunity.  Do you have anything to say to all the visiting adoptees here?


I am very proud of the fact that all of you have grown healthy and that you have returned to visit Korea.  You were given the opportunity that I so desired to have.  But I sincerely wish that all of you will do your best in your profession or your studies and strive to be a greater person.
Posted by Steve Morrison at 2:13 AM No comments: