I got this happy news from an agency in Korea.  The EPs got approved just a few hours ago in Korea (as of current time of posting this Mon, 3/26/12 7AM).  I know some of the EPs got approved earlier for other agencies.  Here is the content of the mail:

"Happy News to share with you and all the too much anxious families!
Finally, the long-awaited EPs have been issued as of late afternoon today.  ..."

Some EPs Are Approved - and Others Still Being Approved

Thanks to the feedbacks received by some who left the comments in my blog, it appears that some have been approved already.  Congratulations!

My prediction is that by next week's end all the first batches of EPs will be approved.  I am told that MOHW received all the EPs from January and February of 2012, and my guess is that by early April both March and April batches will be sumitted.

So if you have gotten the news that your EP has been approved, a hearty congratulations!

If you haven't heard the news, just hang on as they are still being approved.
I congratulate all of you ahead of time!

An interesting article that deals with the impact of the new adoption laws.
This article is from The Korea Herald, posted 3-18-12.
The link is at:  http://www.koreaherald.com/national/Detail.jsp?newsMLId=20120318000381
Adoption Law Revision Draws Fire
A government plan to prevent birth mothers from giving up their babies for adoption too quickly may cause such women greater distress, experts say.

They say that the measures could cause greater distress to mothers by allowing them time to get attached to their babies. They also fear the emergence of a black market for adoption as the government makes it increasingly difficult to place babies for adoption.

The Ministry of Health and Welfare announced its revised adoption law on March 9, under which adoption will be allowed after seven days have passed since birth.

During those seven days, the mother will receive mandatory counseling on available parenting support.

Adoption agencies will also be required to check aspiring adoptive families’ criminal records, particularly for child abuse or sexual violence. Adoptive parents will have to complete mandatory education on parenting before adopting, while city and district offices will no longer be able to grant adoptions with just the relevant documents. Adoption will first be permitted by the family courts.

The ministry plans to complete the legislation procedures to enforce the measures in August.

Officials said the plan is aimed at keeping children with their biological mothers where possible, and to encourage adoption in Korea rather than abroad.

“Our priority in revising the adoption law is guaranteeing a friendly environment for children. Their rights will be respected under the revisions,” said Lee Kyung-eun, a ministry official. However, others called the provision requiring birth mothers to keep babies for seven days after birth cruel.

“It is generally understood that mothers decide whether or not to keep the baby before labor. So, the planned revision will just add to the distress,” a social worker at an organization for single mothers said.

She said poor single mothers stay in the hospital or a maternity center for an average of three days after natural childbirth, before placing their baby for adoption. When their normal life resumes, at least on the surface, they pretend as if the birth never happened.

“Birth mothers will likely feel more of a sense of guilt about adoption, because of the seven-day mandatory deliberation, which may complicate the adoption process. Under the new system, if legislated, we may see a gloomy scenario of mothers just abandoning their babies after birth and disappearing,” she said.

Another social worker at a different organization said that the clause requiring family courts to approve adoption could create a black market for adoption.

In Korea, more than 70 percent of domestic adoptions are kept private and secret to the adopted child.

“Going to the court means that adoption becomes a public matter which will undergo all the legal steps. Then, adoptive parents will find it difficult to keep their adoption private and secret. They would rather look for single moms who are willing to put their babies for adoption out of the court,” she said.

“The court permission system is likely to make adoption public. Considering that the public still prefer keeping adoption secret, the plan is premature and stressful for those involved.”

Some social workers said they had pointed out possible problems to the authorities but their concerns were dismissed.

Government officials, however, stress that their plan to make adoption harder is focused on the child and that mothers should have a greater sense of responsibility.

They also said that many single mothers tend to make the life time decision right after birth without giving any thought to motherhood.

“Rep. Choi Young-hee of the Democratic United Party, who initiated the revision, called for a 30-day deliberation but we have reduced it to a week,” said Kim Mi-kyung, a ministry official.

Other countries have such a deliberation period. It is 24-72 hours in the U.S. and up to six weeks in the U.K.

“We are aware of the criticism. Let’s focus on the babies. Keeping them with their birth mothers is definitely best for newborns,” Kim said.

By Bae Ji-sook
Posted by Steve Morrison at 6:52 PM 6 comments:

Being a Voice for Voiceless Children

If you are an adoptee, and if you have adopted children that can talk, or even make a sound, please make a short video and share it online.  Please share the blessings you have received through adoption.  Your voice is needed to change the hearts and minds of the Korean authorities and those against intercountry adoption to allow all the homeless children in Korea to have homes of their own, whether they be domestic or intercountry.

Past several years there have been so many negative presses regarding intercountry adoption in Korea and we need to show that a few negative voices do not represent the great majority of adoptees that have done well.  Just as the children that have lived with their biological parents can have some misgivings regarding their biological families, adoptees are no exemptions.

Please visit the Voice of Love website at:  http://voiceoflove.org/
In it you will find the instruction on how to upload a video.  You can take a short video using a digital camera or be more professional like some have chosen to do.  But it really doesn't matter how well the videos are done.  It's the message that is important.

We're up to 11 videos now, and this is far fewer than I had hoped. If you get the chance, it would be fantastic if you could make a short video of your child and share your experience.  The video deadline is March 30th, but I think the Voice of Love will accept late submissions.

Here's the growing playlist of Voice of Love submissions at: https://www.youtube.com/playlist?list=PLCD8A17AC1C843F9F.  We would love to include yours.

It is all about being a voice for those children that don't.

EP Submissions and Other Questions

Many have emailed me or commented whether there will be another batch of EP submissions, or when they might be submitted.  This in light of all the changes happening in Korea with changes in the adoption laws and the involvement of Family Court to determine the eligibility or qualification of adoptive families that the agencies recommend.  The new laws will take effect in August 2012.  But I am told that MOHW will continue to give the final EP approval.  The adoption process, whether they be domestic or intercountry, is still a work in progress in Korea.

By the way, the March 5th EP requests have not been approved yet as it has not been two weeks.  But they are expected to be reviewed and approved soon.  The agency I talked with believes that it should take two weeks to approve.  The current understanding is that MOHW will continue to accept new batch of EP applications each month.

Typically, the way it works is that MOHW sets the EP quota for the given year.  This year's EP approval will be 10% less than that of 2011.  The total EP number will be divided by 12 to reach the monthly EP allocation.  But because the MOHW did not approve the EPs for the first two months this year, either they have larger batches to approve initially, or divide this year's EP application by the remaining months (10 months) to reach an adjusted number EP.  Either way, the MOHW is working to clear all the EPs that are set for this year month-by-month.

If there is other information or changes, I will keep you all posted.
Also, thanks to all the great comments and questions.
I will do my best to serve all of you wonderful folks. 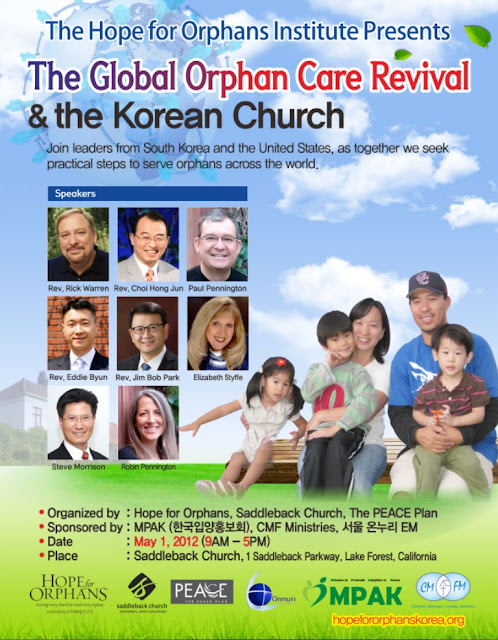 I am proud to be a part of this event at the Saddleback Church on May 1, 2012.  I want to invite all of you to this event if you can attend.  The event will be conducted in bi-lingual, and I am one of the speakers along with the Pastors Rick Warren, Choi Hong Jun, Eddie Byun, Jim Bob Park, along with Paul & Robin Pennington and Elizabeth Styffe.  This event is meant to wake up the Korean churches the need to respond to the orphan crisis not only in Korea, but elswhere in the world.

An English version of the poster is being worked at this time and will be uploaded later.

The Hope for Orphans Institute Presents

Join pastors and leaders from around the world on May 1st in getting to know God’s heart for the orphan and gaining a practical vision for orphan care. 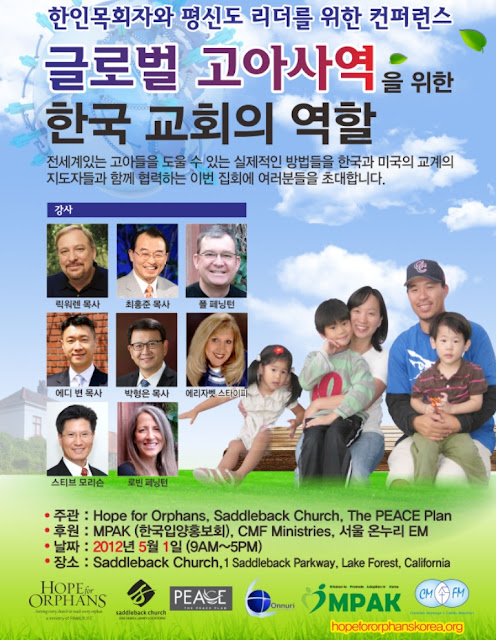 EP - It is Really Happening!

EP is really happening in Korea, starting from March 5th.
I got this email from a friend of mine who works at an adoption agency in Korea.

Hope this finds you and your family quite well as always.
As of today, March 5 (Mon), the Ministry began to accept our paperworks for EPs.
It's a great news though delayed.

I wish all the waiting families have a great day as well at this great news!