The Special Adoption Law was enacted on August 5, 2012.  As soon as the law was enacted, there was a sharp jump in the abandonment through the Baby Box.  Before the law, the average number of children being abandoned through the Baby Box was four.  Right after the law, the average jumped four times to 16 per month.  In that year, there were 79 children abandoned, of which only eight were special needs.  More and more healthy babies were being abandoned. 43% of the birthmothers left memos describing how they could not raise them as the law made it difficult for them to relinquish their babies at the adoption agencies without first registering their babies under mothers' names.

As for this year, as of October 15, 2013, there have been 202 babies abandoned, of which 18 of them were special needs. There are people who continue to deny the relationship between the Special Adoption Law and the number of children being abandoned.  But it is clear, as the birthmothers have testified and blamed the law for making it difficult for them to relinquish them legally. 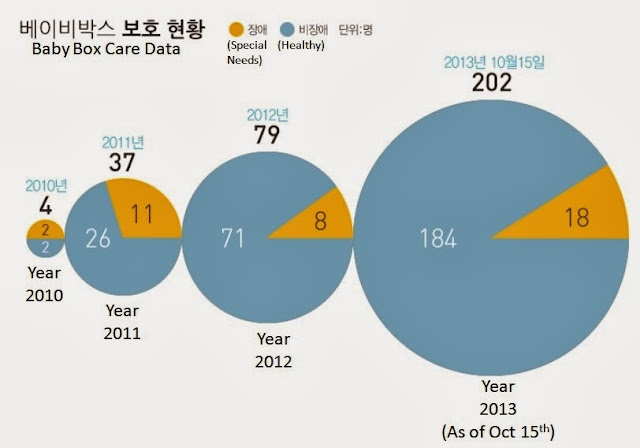