The Ruling Party Gets Involved - in the Special Adoption Law 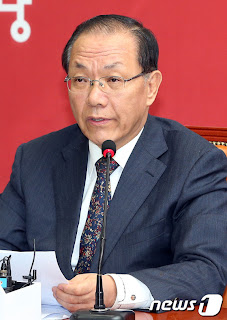 Mr. Hwang Woo-yea, Chairman of the ruling Saenuri Party
On April 15th Mr. Hwang Woo-yea (pictured above), the chairman of the Saenuri Party stated “From what I gather from the news media there has been a 20-fold increase in the number of babies being abandoned since three years ago, and this has caused me to sound the alarm.  The safety and happiness of families need to come first as we tackle this problem and the party must embrace this as a core value and look at the problems brought by the law.  In so doing we can expect to contribute to the development of the adoption culture in keeping abreast with that of the other developed nations.”
Chairman Hwang emphasized in the interview with the Kukminilbo that “Even if there is one child that is hurt by the shortcomings of the law, then you can conclude that the law has problems.  We will examine the issues not only on the abandonments, but also look at aiding birthmothers and other issues as well.”
Mr. Kim Hong Joon (50, an MPAK member) of the Task Force to Revise the Law stated that “While it is a little late in the ruling party’s involvement, but nevertheless it is a welcome sign.  The Special Adoption Law forces the birthmothers to raise their children despite the fact they are not able to do so.  But the support for birthmothers must not be ignored.”
Child abandonment is not the only issue with the law.  The other big issue is with the drastic reduction in the number of domestic adoption as the figure below shows. 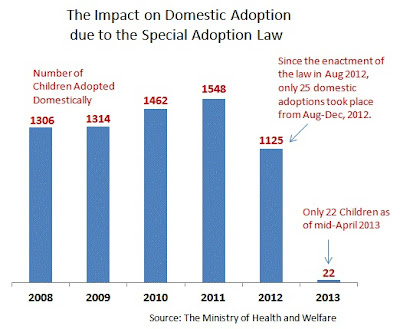 Since the enactment of the Special Adoption Law on August 5, 2012, the number of children placed for adoption from August – December 2012 was only 25 children.  For the first four months of 2013, the number of children adopted domestically is only 22.  The Family Court just recently approved the first case of intercountry adoption, and the family is waiting on the 14-day period.
The data clearly shows that even the domestic adoption is greatly impacted by the Special Adoption Law.  I believe the problems can be isolated into two areas.  One is with the implementation of the law, and the other is with the requirement by the law that children can be placed for adoption only after registering into birthmothers’ family registry.
The implementation problem always exists in a nation that is getting ready to ratify the Hague Adoption Convention, and due to the unfamiliarity of the convention it will take some time to mature the process.  This is one reason for the drastic decline in the adoption results.  The Family Court is not able to process the new practices as if it is routine. But the other reason is that because of the birth registry requirements, and that the children can only begin the adoption process after the registry is complete, this has caused birthmothers choosing other means such as abandonment, black market adoption, in some cases killing the babies.  The seven days holding is required by the law before relinquishing the babies for adoption, and some birthmothers have opted to keep their babies, but not significant enough.
The limitation on birthmothers’ freedom to relinquish their babies at birth has resulted in drastic drop in intakes by the adoption agencies all over Korea.  The agencies have experienced only 30% level of the usual intake volume.  This is even bigger reason why the number of adoptions plummeted due to the law.
It is very obvious, despite the oppositions’ arguments that refuse to acknowledge there are problems with the Special Adoption Law, the law has produced two very unwelcome outcomes:  A sharp INCREASE in the number of children being abandoned, and a sharp DECREASE in the number of adoptions taking place.  Something’s really really wrong at both ends, and it’s got to be revised.
Posted by Steve Morrison at 5:54 PM