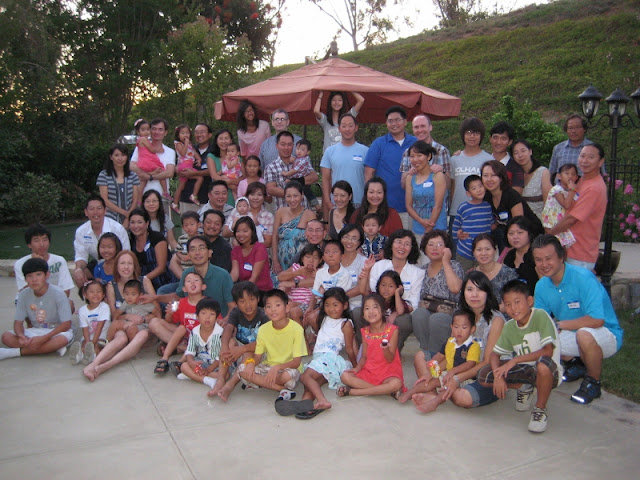 MPAK-OC group met in Irvine, CA on Saturday, August 27, 2011.
﻿
MPAK - Orange County Group gathered at Mrs. Nanjoo Choi's house on Saturday, August 27th.  The gathering drew a large crowd at the beautiful house of Mrs. Choi, who adopted a son from Korea 11 years ago.  The group was headed by Brian and Kathy Shin, who adopted three children from Korea.  While Brian cooked Korean Kalbi, the children played in the backyard in a mini golf putt green, and the grown ups sat in different pockets to chat and merry making through their adoption stories. 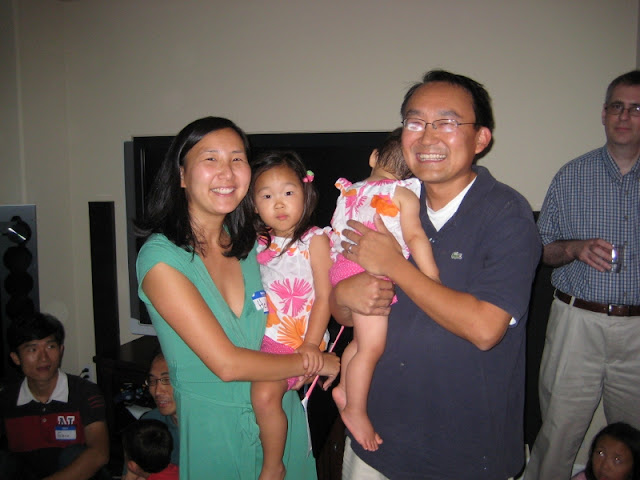 Helen and Rich Lee Family shared their adoption story
﻿
The sumptuous meal was excellent as people brought many types of food.  There was an adoption story presented by Rich and Helen Lee on their adoption journey of adopting their two daugthers from Korea.  Their story was warm and beautiful, and brought laughter and applause (I will try to post their story in a separate blog).  It was wonderful to see all the newly arrived children that came this year.  But there were several families that were caught up on the Korean quota issue and lamented the fact that they won't be able to see their children until 2012.  We hope their children will come home soon. 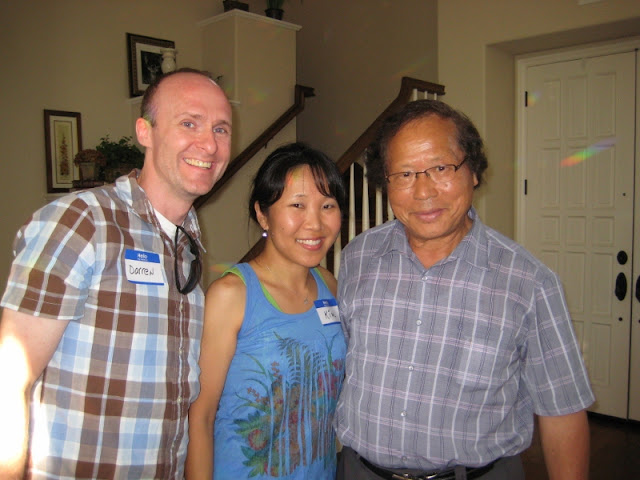 Mr. Yoon (right) , an orphange director from Korea meets one his orphanage graduate Kim (center) and her husband Darren (left).  This unplanned meeting was a great surprise for both, and a blessing to all of us.
﻿
One of the highlights of the gathering was the meeting between the two very special people.  One was an orphanage director Mr. Yoon who came from Korea on family matter, and the other was an adoptee named Kim, who grew up in the same orphanage under the care of Mr. Yoon.  Kim was adopted 32 years ago, and she and her husband Darren Clark were waiting for their child to come home from Korea.  At first Mr. Yoon didn't recognize Kim, but when she stated her Korean name, Mr. Yoon recognized her immediately.  Both Mr. Yoon and Kim wept as they hugged.  Mr. Yoon shared a brief remarks to all those gathered and could not control his emotion, thus causing many eyes in the room to tear up.

The evening was a tremendously blessing time for all those attending, and I want to thank our host Mrs. Nanjoo Choi again for the great hosting she provided to all of us.  Another special thanks to Brian and Kathy Shin for the great job in organizing this gathering, and thanks to all those that came to the MPAK-OC gathering.
Posted by Steve Morrison at 12:58 AM