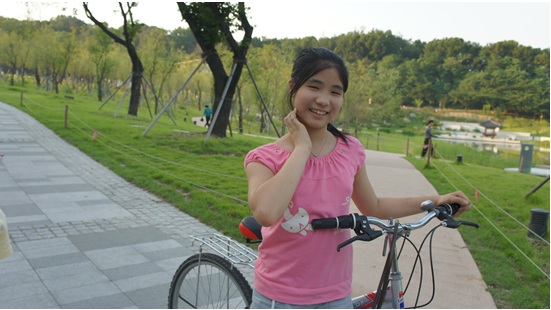 Suha Kim lives in Incheon, Korea
Should you be transparent about your adoption to others?  This question is not much of a problem for most non-Korean heritage families adopting children from Korea.  But for many Korean-Americans, this is a big struggle - whether to tell their children they were adopted or not, or even to tell others that they are adoptive families. But Suha's story goes even further.  She describes the open adoption experience as well.  Open adoption is when children are allowed to meet birthparents, and transparent adoption is where adoption is not kept secret.  I hope Suha Kim's story will help to put your adoption experience in a proper perspective.

To give a background on her story, when MPAK had a historic first ever national conference to promote domestic adoption in Korea on Saturday, October 14, 2000, there were around 450 in attendance from all corners of Korea.  We hung the banners around the city of Kwachon to aanounce the event titled, "The 1st Annual Adoptive Families Gathering - To Promote Domestic Adoption".


A woman named Haeran Lee saw the banners, and got curious as to what the event was all about.  She attended and watched musical performances and the presentations on the adoption stories by a few parents.  She had no idea that this event would change her life forever.  She was so moved by the event, that when Monday came, she and her husband, a pastor of a church, immediately went to an adoption agency to adopt a baby girl.  A few weeks later, Suha Kim came home.  The family had a biological son, and Suha was their second child.
Suha is now in 5th grade, and she has blossomed so beautifully.  The family adopted another girl a few years later named Yuna.  The children are being homeschooled, and Suha is a voracious reader, and she is well beyond her years in terms of academic maturity.  This blog will feature a writing by Suha Kim on her adoption experiences and her experience of meeting her birthmother.  She presented her story at the Annual MPAK Summer Adoption Seminar (Aug 12-14), which was attended by over 250 families from all over Korea.

Hello my name is Suha Kim. I am in fifth grade. I have an older brother who is in 10th grade and a younger sister in 2nd grade. In my family, only my younger sister and I were adopted. 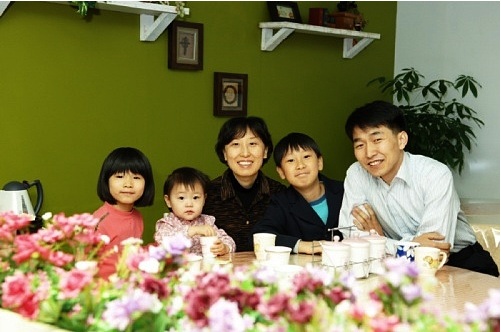 Earier picture of Suha's family when she was a toddler, Suha is on the left
When I was seven years old, I met my birthmother for the first time. Since then, I see her every year on my birthday. I call her “Auntie”.  Whenever Auntie comes to visit me, she brings a birthday present. She also brings gifts for my brother, younger sister, my Mom and Dad. I love receiving presents from my birthmother.
Time to time my Mom tells me, “I am so glad that Auntie comes to see you once a year. There is yet another person who loves and cares for you, Suha.”  Honestly, I thought my Mom would not want me to see my birthmother. But after hearing that from my Mom, I was relieved to know that I could see her once a year. I was thankful that my Mom understood how I felt.
I think my Mom is a courageous woman. It is very unusual in Korea for an adopted child to meet her birthmother once a year. I think you would have to be a bold person to allow such a thing. I also think my Mom understands people well.
Sometime ago, while I was talking with my Mom about adoption she said, “I can only imagine how scared Auntie must have been for having a baby at such a young age. I wanted her to be able see you grow up. That is the reason why I have made arrangements for the two of you to meet once a year on your birthday.”
I also tried to imagine how scared Auntie would have felt. I do understand. Although I see my birthmother once a year, there is one very important fact I will never forget. My Mom is my REAL Mom. If you were adopted and have had a chance to meet your birthmother, you would probably say the same thing -- that your Mom is your REAL Mom.  That is why I recommend that adopted children to meet with their birthmother even if it’s just once.
My Mom has always talked with me on adoption.  Now I am old enough to understand about adoption. But I still think, “So what if I was adopted?” I think my Mom made a right choice by telling me that I was adopted when I was still little. Because she was so open with me I am able to think positively about adoption.
I think about my birthmother when my Mom scolds me. My Mom says that adopted children often think about their birthmothers when being reprimanded. I think it’s very natural.
I have never asked, “Why couldn’t my birthmother keep me?” I just accept it as reality. When I grow up I really hope to adopt three children. I want to be able to understand how adoptive parents feel and how adopted children feel. I want to share with my adopted children how I felt as an adoptee.
I think adoptive parents usually feel afraid or offended when their kids want to meet their birthmothers. But, I think you should just accept it. Adopted children naturally have desire to meet their birthmothers once in their life time. Some Moms don’t want their kids to have other mothers. They might think that their kids would consider the birthmothers as their real Moms. Kids are only curious to know about them.  I remember asking my Mom what my birthmother looked like and if she was pretty.
It was when I met the Auntie for the third time that my Mom finally told me that the lady was actually my birthmother.  She tells me that I responded by saying “I had a feeling that was the case”.  Even today when I think about that episode, it makes me smile. I was so immature. Meeting Auntie answered all my questions. I know what she looks like, what kind of hair she has—my curiosity has been satisfied.
Once, my Mom was scolding me and I told her that I missed my birthmother. I could tell that she was shocked. She stopped scolding immediately. Since then, I could not share everything with my Mom. I didn’t expect to see her get upset. I thought she would never get surprised by such a thing. When I saw her expression, I was very surprised too.
So, I have one advice for you. When your child says that she wants to see her birthmother, don’t be shocked. If you become upset, your child would not be able to share her honest feelings. Also, when your child wants to talk about adoption, please listen carefully and attentively. When your child sees that you are interested, she would want to talk more and more about adoption. Then, you will be able to have so much more conversations.
I suppose adoptive parents can get help from books on adoption. I read a lot about adoption. When I read I can really learn and understand about adoption and other adopted children.
There is a book titled “No More Secrets.” There are many stories in the book but my favorite is the story about Lavender Princess Eunbi. Princess Eunbi grew jealous of her little adopted sister who drew all the attention from her parents.
She took 2/3 of my parents’ love and didn’t want to listen to me, so I wanted her to be sent back. Now I think she is pretty cute when she listens to me. But when she gets all the attention, I feel like saying “Send her back”.  I am glad that I have a younger sister.
Sometimes, I feel very proud to be adopted. I think I started feeling this way ever since I joined The Korean Adopted Children’s Choir. Maybe it’s because people recognize us as the adopted children. I think it’s a good thing. It’s the kind of self confidence that comes by declaring “I was adopted!” 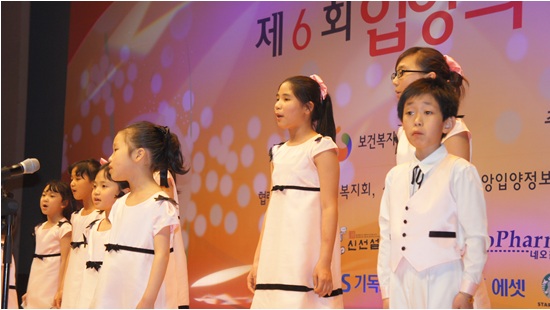 Suha in the Korean Adopted Children's Choir performing during the National Adoption Day event on May 11, 2001, Seoul, Korea.  The Choir is organized by MPAK.
I think children need to have self confidence. Children need their parents’ help to become confident. My self confidence started with my parents’ teachings but later I improved on it myself.
Once, as I was getting ready to perform on the stage my inner voice said, “I was adopted, adoption is nothing to be ashamed of!” I wish that a lot of people would realize that adoption is not shameful.
I wish that many people would come to know adoption isn’t something to be embarrassed, but that it has to do with being happy and in love.  I wish to continue to declare this through my involvement with the Korean Adopted Children’s Choir. Adoption is not something to be ashamed of, but that it is love!!  Adoption is happiness!!  When all the adopted children come together and declare together such message, then all the people will believe that adoption is truly happiness and love.
Thank you.
Suha Kim
Posted by Steve Morrison at 10:04 AM