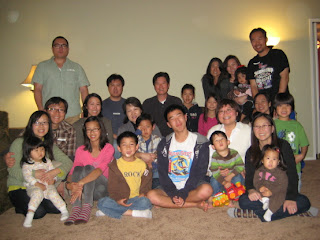 MPAK had its first Valley Regional Group meeting tonight.
Because MPAK Southern California group became too large to be a single group, it was decided this year that it would split into three groups:  MPAK Valley Region, MPAK LA, and MPAK Orange County (OC).  Today, both the Valley Region and the OC groups met at two different locations.
I attended the smaller of the two and the turn out was great.  There were a total of 30 people including the children.  The picture shows those who stayed through the end to take the picture.  Thanks to Andrew and Helen Kim for hosting all of us tonight.
The food was great with ribeye steak, sausage, grilled chicken, mandoos, and so many other goodies.  The environment was very electric with kids running around the house merrily, and the adults all sharing one another's adoption experiences, or for some the anticipation of waiting for their children to come home soon.
It was good thing that we split into three groups as I heard a couple of comments that because the Valley Region is close to them it made them so much easier to attend.
The sharing of the adoption story by Andrew and Helen was very touching and moving as they adopted three children from Korea, and how the experiences have blessed them tremendously.  Apparently they are not done yet.  They are contemplating another adoption either through intercountry or through domestic foster care.  I thank them for their openness, and providing great leadership for the Valley Region families.
I will also post the OC group meeting as well.
Posted by Steve Morrison at 11:38 PM