While the Government Closed Its Eyes, the Baby Box Accepted 300 Babies

I translated it as shown below. The figure was obtained from another news article, and it shows the drmatic increase in the rise of the abandonment of children after the Special Adoption Law was enacted starting August 5, 2012. 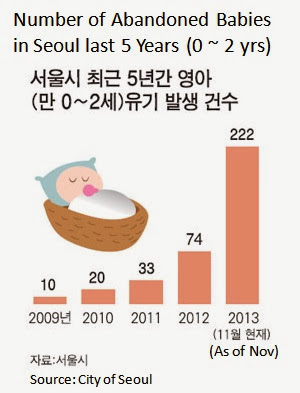 The Editorial by Kukmin Daily

"While the Government Closed Its Eyes, the Baby Box Accepted 300 Babies."


Since the enactment of the Special Adoption Law on August of the last year, the number of babies being abandoned is continuing to soar.  For the past 16 months there have been only the arguments surrounding the law but no action to resolve the problems.
Since its inception of the Baby Box on December 2009 at the Jusarang Community Church located in Seoul Kwanak-gu district, there have been over 300 children abandoned.  It is chilling to think what might have happened to these babies if the Baby Box was not around.However, the government claimed that the existence of the Baby Box violates the intents of the Special Adoption Law, and pressured the church to shut down the operation.  When the church resisted the government cut off the existing financial support to the church. The Baby Box is now being supported by the offerings and the donations, as it struggles to meet its needs.  The question that I want to ask is how the government can administer its policy in this manner.
From the beginning the Special Adoption Law has been very controversial.  The law changed the adoption reporting system at the city, region, and district level to the adoption approval process through the court, and required the birth registration as a condition to process for adoptions, and the seven-days waiting period by birthmothers before they can relinquish their children for adoption.  The government thought that this law would be highly effective and result in the better records of birth parents, stop illegal adoptions, and reduce the number of abandonments of the babies.
But the results show too many unexpected fallouts.  The unwed mothers in their teens are afraid of being identified through the birth registration requirement, and the adoption process has become impractical and complex through the use of the court system. Already there is a movement to revise the law, and the Anti-Corruption & Civil Rights Commission continues to receive many complaints regarding the law.
Fortunately the City of Seoul has announced on December 26th, that they will utilize the social service helps from the other regions starting new year to stave off the shortage of hands in taking care of the children that came through the Baby Box.  To do this the city has raised the budget to handle this from $2500 this year to $15,000 next year.  However, there is still a shortage of social workers and professional helps through weak management.  Therefore the babies under a month still may face the risk of safety if things are not handled properly.
Even if the intent of the law was good, if it results in so many negative consequences, it needs to be re-examined. The government must come up with a solution to remedy this.  Is it conscionable for us think that these children that have been brought into this world without blessings be handled so carelessly?