Capt. Tim Paolini, US Navy - An American Soldier as an Adoptee Santa


An American Soldier as an Adoptee Santa


“I came to give back to what I have received as a child.” 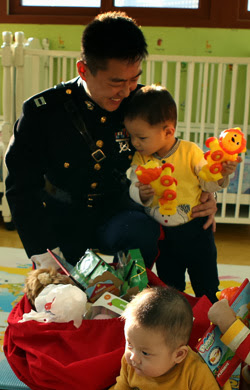 Capt Timothy Paolini of the US Navy visited the children to deliver the presents at the Holt Children’s Center at Seoul’s Mapo-gu District on December 13th.


“Wow, it’s the Santa!”
The volunteers shouted as a young man with the red toy bag appeared.
The young man was Capt Tim Paolini (29), a Korean-American who visited the children at the Holt Children’s Services in the afternoon of the 13th.  He has been serving in Korea as a captain for the US Navy since February of this year.
Born in 1984, he was abandoned at the Suwon train station when he was just three years old, and was subsequently adopted to the US through Holt.
Capt. Paolini visited the children at Holt to present them with toys. As a part of the Toys for Tots program, Cap. Paolini prepared since November by coordinating the toy drives among his troops, and placing the posters throughout the base to get the words out.
The eyes of the five children that were at the care opened wide as the Capt. Paolini entered.  As soon as he opened the red toy bags, the children clamored around him eagerly.  There were teddy bears, toy excavators, cars and many other toys that came out of the bag and the children could not take their eyes off. The Capt. Paolini was afraid that there might not be a good reaction by the children, but once he saw how children reacted he was very happy and smiled big.
“I feel like I have traveled past through a time machine” stated Capt. Paolini as he looked at the children, for as he saw in them the images of himself 20 years ago.  He said, “As I look at these children being loved and cared, I think that there must have been someone who also helped me. Thinking of that makes me grateful.” Paolini said with a heart full of contentment.
The toys that he and his troops collected came through the donation boxes set up inside the Yongsan Base.  Over 2000 toys were collected through this program. Because he could not attend the official toy give away ceremony on 19th, he brought over 40 toys to share with the children.
As he looked over the children, Capt. Paolini was very grateful that he was given the chance to be adopted.
Posted by Steve Morrison at 4:37 PM