The practice of sending the children of the Baby Box to institutions for 10 years has now been broken. They now have chance to be adopted and grow up in families. 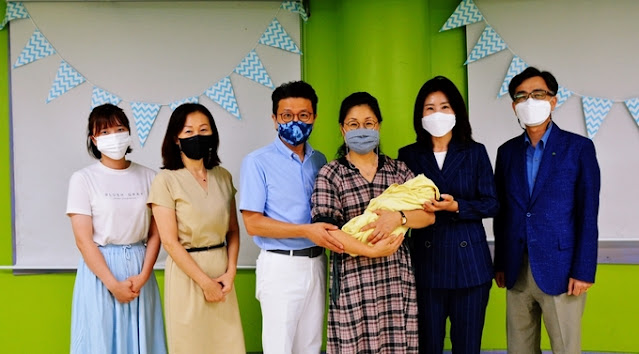 Mr. Oh Chang Hwa and his wife hold an infant baby from the Baby Box as they are new foster care parents. Rep. Kim Miae is next to his wife.

On August 11, 2021, a baby from the Baby Box was transferred over to a  new temporary foster family by the Seoul Child Protection Center (서울아동복지센타) to the  waiting arms Mr. and Mrs. Oh, Chang Hwa.  Mr. Oh is on the board of MPAK-Korea, and the leader for the Korean Adoptive Families Alliance (KAFA), the organization that made this new policy possible.

While the baby is under the care of the foster family, the Kwanak District will issue a temporary ID certifying the birth of the child, and a determination will be made to which agency the child will be assigned to be adopted.  Not sure whether the child will be available for intercountry adoption, but most likely not as there is no official document on birthparents' relinquishment decision.

Previously, once a baby is abandoned at the Baby Box, the police, under the direction of the Kwanak District takes the baby to the children's hospital for examination.  Once this is done the baby is transferred to the Seoul Child Protection Center. The Center then assigns the baby to an orphanage.  Once the baby is under the care of an orphanage, the orphanage director has the full custody rights and registers the baby's birth record with his him/her as the guardianship of the child.  When this happens, the baby is highly unlikely to be adopted as most of the orphanage directors are unwilling to give up the child for adoption for various reasons.  The baby is pretty much stuck in the orphanage until aging out at 18 or at most 24 (current law now enables an aging-out youths to voluntarily stay in their orphanage up to 24 years old, but free to emancipate after the age 18).

The problem with the old method was that there was a deliberate omission of the requirements in the law by the Kwanak District and the Seoul Child Protection Center to place higher priority in giving the chance to be in homes (either by foster care or by adoption) before sending them over to institutions. However, because of their carelessness and refusal to take additional steps necessary, they simply assigned the children into institutions as this was much simpler and easier to do.  They did not pay higher priority in handling these children to find homes, but simply reassigned them to institutions.  This  malpractice was investigated and discovered by Mr. Kim Ji Young, an adoptive father and the general manager at KAFA. 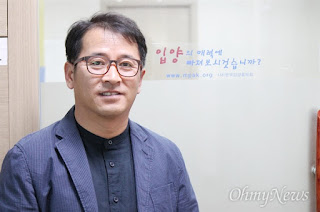 Mr. Kim Ji Young, an adoptive father, whose hard-nosed investigation and tenacity laid the groundwork that made this possible

Mr. Kim took the matter to both the Kwanak District and to the Seoul Child Protection Center and challenged them of their negligence to place higher priority of allowing children to be in homes first before sending them over to institutions.  While the Kwanak District acknowledged the omission and agreed to fix the process, the Seoul Child Protection Center refused to acknowledge and continued to send children to institutions.  Mr. Kim then went to the Rep. Kim Miae and laid out the story of what was happening, and she agreed that something must be done about this.  Their solution was to meet with Mr. Oh Se Hoon, the mayor of Seoul. 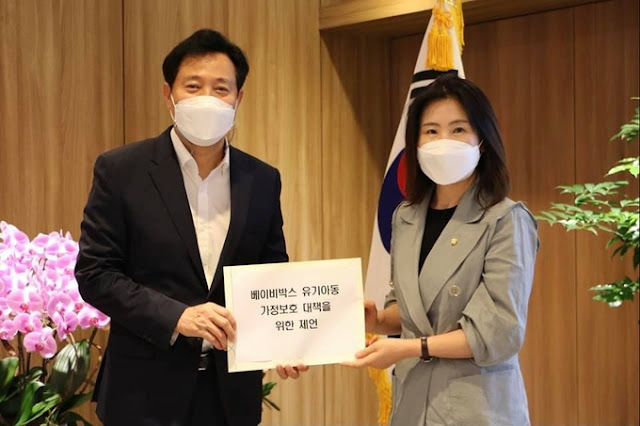 Seoul's Mayor Oh Se Hoon accepts the proposal for the protection of the children from the Baby Box by Rep. Kim Miae

Rep. Kim Miae and Mr. Kim Ji Young met with the Mayor Oh on July 19, 2021, and together they concluded that both the Kwanak District and the Seoul Child Protection Center (both under the jurisdiction of Seoul) violated the due process and the Mayor decreed an order for both to follow the proper procedure of giving higher priority to place the children of the Baby Box to into families (foster or adoption) than to institutions.  This was especially important as the mayor Oh was just elected as the mayor of Seoul on April 7, 2021.  During the 10 years, there has been around 1300 babies sent to institutions with virtually no chance to be adopted. The other 600 or so babies have been reclaimed by the birthmothers after they were provided with counseling by the staff members at the Baby Box. 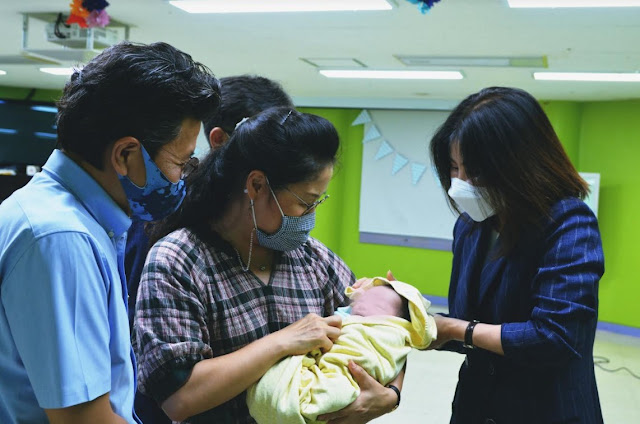 Mr. Oh Chang Hwa and his wife are new foster parents as Rep. Kim looks on.

In the span of 10 years, 1300 children have lost their opportunity to homes of their own due to the negligence of the government workers that chosen easy way out to handle many babies that came through the Baby Box.  I'm almost in tears just thinking about these children.  I hope there is a way to reach back to these children of the earlier period and attempt to find families for them.

Now that the children of the Baby Box will be given the higher priority to find families of their own, there is another hurdle to cross over. Finding the temporary foster families to take care of the babies, sometimes two to four weeks before they are assigned to the agencies and the babies will be taken care by their own network of foster parents until the children are adopted.

Thanks to Mr. Kim Ji Young for his hard-nosed efforts in making this possible, and thanks to Rep. Kim Miae and the Mayor Oh Se Hoon for their cooperative efforts to find a solution that should have been there all along.

Posted by Steve Morrison at 3:46 PM