The Korean government made a dramatic announcement on July 13, 2021, on their plan to support the aged-out orphans by increasing the emancipation age limit from 18 to 24.  Having realized the great sufferings by the youths, the Korean government stated that the health and welfare of these youth is the responsibility of the government.

Vice Minister Yang Sung-il of the Ministry of Health and Welfare making the dramatic announcement with a sign language interpreter in action.

Each year there are approximately 2500 aged-out orphans leaving their respective institutions in Korea when they turn 18. And most of these orphans are unprepared to face the world.  They have been dependent on their orphanage care for most of their lives. They lived with what they were given without having to earn anything or work towards the goals of any kind.   Aging-out and being emancipated from orphanage systems require independent living where they must make decisions on their own.  They must fend for themselves to find living arrangements, get jobs, or get educated.  Most of them do not fare well, as they suffer the pressure to survive in the real world where they must look out for themselves.  Many boys turn to crime and girls to prostitution.  The result of this is that there are many unwanted pregnancies where the young mothers abandon or relinquish their babies for adoption or take them to institutions. And the cycle repeats again. For many orphans it is a vicious cycle they must suffer for not growing up in homes.  However, there are some success stories, but they are rare.

What stood out the most in the government data presented was the comparison of suicidal thoughts among the aged-out youth was 50% compared to a normal youth at 16.3%, thus the aged-out youths were 3 times more likely to think about suicide.

The Korean government came up with six different areas of support to strengthen the youths from childhood protection to independent living: 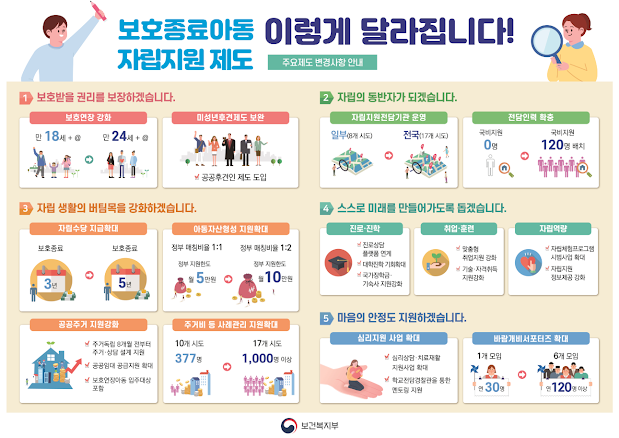 Graphical representation of the government's roadmap to support the Aged-Out orphans in the future.
Source:  Korea Ministry of Health and Welfare

1) Increase the rights of the protected youths to stay in institutions up to the age 24 (instead of being forced out at 18) but make this voluntary as some youths may opt out earlier to live by themselves.

2) Become Companion by establishing Self-Reliance Support Center throughout Korea where the youths can turn to for help or assistance.

3) Strengthen the Pillar of Independent Living by ensuring adequate income and residential assistance. This is done by increasing the funds for aging-out orphans as follows:

b.       Steppingstone Bank Account for each outside donations made in a child’s name will be matched 2:1. For example if a child receives an outside donation of $100 per month, the government will kick in additional 200%, thus resulting in $300 each child per month.  If a child admitted into an institution as an infant and stays for 24 years, the child will have $300 x 12 months x 24 years = $86,400 by the time the person is emancipated.

c.       In addition to this generous program, once a youth is emancipated, he/she will get increase in the government support from three years to five years.  For instance, the typical government support at $300 per month for five years will amount to additional $18,000 by the time the youth turn 27.

d.       Housing Support – While this is not completely free, the housing support makes it very favorable for the youth to obtain and live with minimum affordable cost. The housing search will begin 8 months prior to emancipation and have it available by the time the youth separates.

e.       Bottomline:  While each child’s case would be different, it is likely that an emancipated youth may depart the orphanage with over $100,000 cash with affordable housing available.

4) Support the gradual transition to future by providing exploration in academic and career opportunities and independent living.

6) Lay the foundation to support the independent living by establishing needed laws, change the terms related to aged-out youths, and create a better communication channels.

While the announcement by the Korean government is very welcome, and it is long overdue, and many orphan youths will benefit from this new program.

However, there are a few areas of concern which must be addressed now or later as the program progresses.

1.     The critical area of support is needed in youth mentoring as these youths have grown up since their childhood to adults without much personal guidance or individual care.  The emancipated orphans, even with abundance of funds and housing available, they are still living alone and need to turn to someone for guidance.

2.     The other critical area is the need for the youths to be properly trained and guided so that they can find appropriate jobs and hold onto them for long time.  This one is a challenge as many youths that began new jobs have often quit very easily or simply not show up to work with no prior notice.  The same is true of academics even when they are given the opportunities to get educated.  It is all too often among the orphan youths to quit their school without graduating.  They are simply not motivated to study or stimulated as they have no family members.  The biggest challenge is not in providing them with enough financial support, but helping them to be more responsible and know early on what is right from wrong.

3.     If an orphan is emancipated with a housing and with such a large sum of money at hand, why would he/she be motivated to look for a job?  Getting an education at 27 is not very likely.  Therefore, a disbursement structure must be built in on how and under what condition the youth will receive the money.

All in all, I believe this announcement by the government is a very welcoming for all the aged-out orphans that have struggled for years to survive.  At least their fear of being alone in the world with no support will be lessened. And that they will have more time to prepare to get educated and be prepared and trained to find jobs and stay on will truly help them to be independent.  If some type of systems can be put in place to avoid the pitfalls and abuses, the program can really work.  I believe this is a great start but a work in progress.  But most of all, this will be a path forward for all the emancipated orphans on the way to becoming successful and productive citizens in the community.

Posted by Steve Morrison at 4:02 PM