National Adoption Month - Why It Hits Me So Close

While the National Adoption Month is being celebrated in the US, I am in Korea this week for the MPAK-related works that include the board meeting, general assembly meeting, an event at an orphanage, KAS, and visiting the adoption agencies.  I have also visited Pastor Lee and the Baby Box and a few more places and individuals to visit.

Last night I met up with my two childhood friends that I used to know while growing up in the Holt Orphanage in Il-San.  These two friends, Kim Chulsoo, and Kim Sunup were two of my closest buddies, who were very smart but never got adopted, and they are severely crippled in their legs. When I met them last night both of them were walking while supported  by crutches.

The National Adoption Month seems to bring out many adoptees to share their narratives for and against adoption, and most adoptive parents are sharing joy in their adopted children.  Some of the narratives I saw seemed to ridicule me doing the adoption promotion as a mission, while many more are continuing to support what I do.
My equation that Adoption = Opportunity is so true and it has hit me so close again through my friend Chulsoo last night.

For several years, I have been meeting with my two buddies each time I visited Korea. Mostly out of fondness for them and the memories and bonds we shared growing up together at Il-San (where I lived eight years with them before being adopted at 14) and to catch up with their lives.  But partly because...and this is hard to swallow and admit...out of guilt that they have suffered so much while I was being loved and educated in the US.  While I was busy fulfilling my dreams in space technology, my friends aged out of the orphanage system were thrown into the world they were not prepared to live when they turned 18.

For this blog, I want to focus on Chulsoo only. I will post another blog that has an interview with Sunup I did earlier. 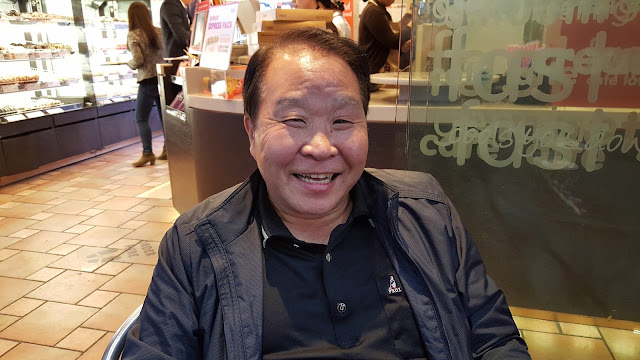 My childhood friend Kim Chulsoo, who was never given the chance to be adopted shared with me his extraordinary life. ﻿

Chulsoo was given nothing when he left the orphanage (nowadays, orphans aging out are given anywhere from $2000 to $5000).  Through some helping hands Chulsoo wound up going to a center for the handicapped to learn some skills, but this didn't last long.  While he had a job, he was discriminated and mistreated, and his boss skipped some salary payments.  Chulsoo told me that he worked in a factory where the factory owner didn't even pay the employees for months, only promising them that he will pay as soon as possible.  Nowhere else to go, he stayed with the factory hoping to get paid.  The next month the factory closed down and the owner ran off without paying the workers. He experienced this a couple of more times in different work places.  Chulsoo suffered from malnutrition and abuse wherever he went. This was especially hard because he was a special needs.

Chulsoo eventually turned to alcohol, and he drank and drank.  He said that he was filled with hatred for everyone.  He despised everyone around him and got into many fights.  He confessed how he was envious of me when he heard that I was being adopted.  He despised the world that disowned him, and lived with other homeless people and slept in the subway stations with other beggars.  He became a beggar, and got into fights with other homeless almost every day. Each day for him was a battle for survival. 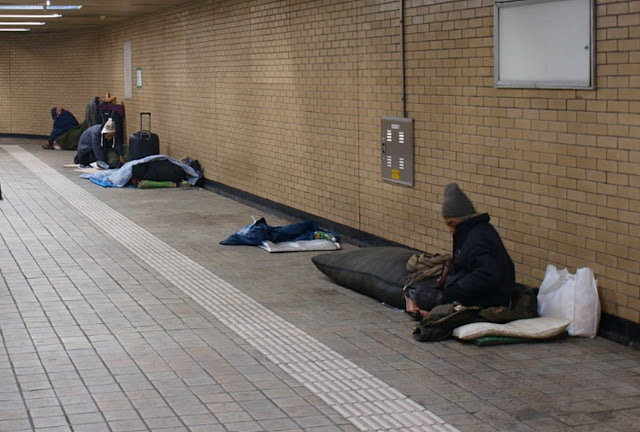 ﻿
This is how Chulsoo lived at one time, in a subway in Seoul as a homeless.
﻿
It was shocking to hear the suffering he went through, and I was speechless.  I was almost moved to tears listening to him.  While I was in the world of comfort and security in the US, I was oblivious to the suffering of my childhood buddy half way around the world.

But Chulsoo had none of this and no one cared for him, and he was alone in the world. He turned into an animal that was not of his character as he blended into nobody, a homeless, a reject by the society that had thrown him into a turmoil, and he so despised his life. He even contemplated suicide, but something kept him going, perhaps a dim hope of love, or perhaps a thin ray of hope that something better might come his way tomorrow.

The better tomorrow came when he decided to leave the homeless life and look for a work.  He was able to get employed at a crystal chandelier manufacturing plant. There he met his wife, who also is a special needs suffering from polio.  At first they lived together, then a daughter came. At the beckoning of Molly Holt who really loved Chulsoo, they were finally married.

I asked him how he overcame the drinking problem.  He said that at one point it got so bad even after the marriage. He would throw tantrums by throwing everything out the window and watched his wife and daughter cry.  Chulsoo said that one day the image of his wife and the daughter crying in the dark gripped his heart.  He began to think, "I shouldn't do this to my wife and my daughter. I better stop this mess. How can I hurt my loved ones?"  Once he began to think like that, something in him began to change.  He drank less and less, and eventually completely stopped drinking.  He feared for his life under the intoxication, and he feared for the safety of his family. He even began to attend a church, and from time to time would perform clarinet solos (he was an excellent clarinet player when we were in the band group at the orphanage. I played a baritone instrument).

Chulsoo held onto a job for many years until he retired recently.  Today he takes care of his grandchildren while their parents work.  He said that he is happy.  He also realized that having a family puts a whole new perspective in life and a feeling of responsibility that drives a man to take care of his family.

As he shared his story, he looked straight at me and asked, "Steve, am I not successful in life?"  I told him with a resounding affirmation,
"Chulsoo, you are very successful in life. I'm very proud of you!"  I continued.
"You should be very proud of what you went through and how despite all the obstacles thrown in your path you never gave up."
"I am very happy and content in seeming my children work hard, and babysitting my grandkids.  I have done well."

In talking with him, I was reminded of a hit Korean movie, "Ode to My Father" (국제시장).  In the movie the main character goes through all sorts of problems to keep a family together through many years of changes in political, social and economical turmoil in Korea.  At the end of the movie, the main character, now a gray haired old man, looks at the old portrait of his father and states, "Father, I have kept our family together, didn't I?...But it was so very difficult...".  The main character also states, "I went through all these difficulties in life, and I am thankful that my children and their children don't have to endure what I endured."

I saw the same character in my friend Chulsoo.

But then there was this painful question in my mind, "Had Chulsoo been adopted like me, he wouldn't have had to suffer so much."

But one thing I know for certain.  That as for me, my adoption has been a tremendous blessing in my life, and it has provided me with an opportunity that I would have never imagined.  And for this reason, I celebrate the existence of the National Adoption Month, and a continued commitment and a resolve to do all I can to speak for the voiceless children and their rights to homes of their own.
Posted by Steve Morrison at 1:41 AM