Your Voices Summarized - You Have Spoken

The folks who really care about your children are still trying to get on the calendar with the court officials.

It is very upsetting that at this juncture of the process with so many parents that have waited so long, due to the new adoption law and the procedure involving the Family Court, someone higher up would make a decision to replace the two of the three judges with three new judges, who now would have roll up their sleeves and learn the laws and regulations on the adoption process all over again.  This of course is putting additional delays.

But I am hopeful that this group of new judges will be quick learners, and that the process will flow again.  One recommendation I would like to make (if I ever get to visit the Family Court) is that in the future, do not replace several judges all at once.  Instead, replace them one at a time with a year lag in between.  This way the continuity will be remained in the process.

But I did also hear a hopeful rumor that one of the discussion items on the table is the issue on the extended stay requirement, and I am hopeful that they can reduce the requirement to just one week.

In my previous blog, I noted that I would share with you the results of many comments received from many readers.  My team at MPAK (namely Denise Adams and Junhyung Lee) spent hours compiling the comments by category, and we had a meeting to go over the data. I did the final edit and plotted the results shown in the figure below. I want to extend a special thanks to Denise and Junhyung for their hard work.

There were many more categories of reasons why the extended travel to Korea would be difficult for many of you.  However, we narrowed it down to the top six reasons why a parent traveling to Korea for 3-4 weeks is very challenging, if not possible.

This is your voice.  You have spoken and I hope the judges in the Family Court will hear your voice and come to a better understanding of those waiting families, and come to a workable solution that will satisfy all of you and the Korean government as well. 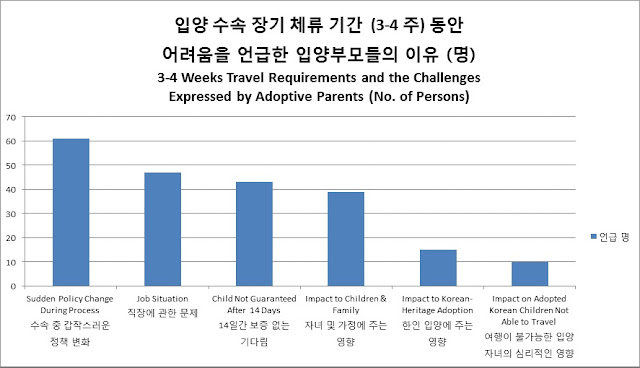 The response comments were provided through the MPAK blog and also includes many emails and Facebook comments as well.  Some have responded with more than one category.
I recommended two solutions at the end of the report.
1. Allow the travel by one of the parent.  If both wish to go this is an option.
2. Deal with the birthmother reconsideration period of 14 days ahead of the visits by the adoptive parents so they won't have to stay in Korea that long.  This also avoids the emotional and psychological impacts on the visiting parents while waiting in Korea for 3-4 weeks, unsure of whether they will be allowed to take their child home or not.
I want to thank all of you for so many valuable comments made in my blog, and thanks for participating in this effort together to make your voices known.
﻿
﻿
Posted by Steve Morrison at 10:29 PM