This announcement is by Sandra Oh, a Korean-American actress.  Please respond to her plea by signing your petition at:  http://www.thinkchildren.org/ 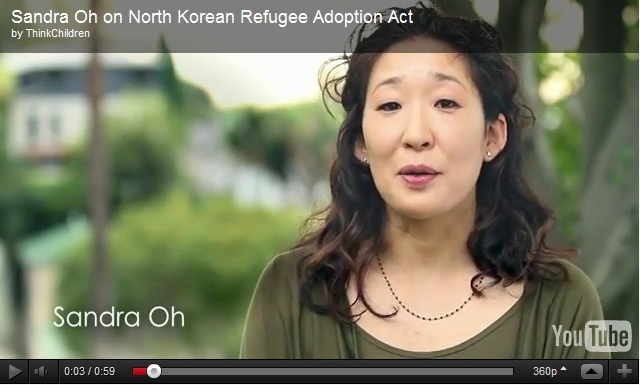 The contents in http://www.thinkchildren.org/ says:

In 1961, Dr. Arthur Schneider adopted Sam Han-Schneider by means of a private bill S.1100, which allowed, for the first time, a bachelor to adopt and bring a foreign child to the United States. Sam Han-Schneider is the founder of Han-Schneider International Children's Foundation, which provides for orphans in need around the world today.

This is not simply an adoption issue, or a Korean American issue. Refugee orphans do not have access to food and clean water, and are vulnerable to human trafficking and deportation. The North Korean Refugee Adoption Act would lessen the burden on parents in the United States who wish to provide a safe and caring home for refugee orphans.
Please vote in favor of the North Korean Refugee Adoption Act (H.R. 1464 and S. 416).

Thank you for your support.

Posted by Steve Morrison at 8:14 PM